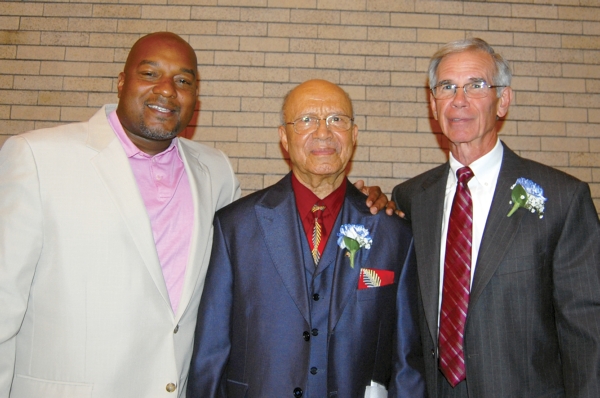 Three men were honored Thursday night for their efforts to support young people and bring the community together.

Former Salisbury High School Principal Dr. Windsor Eagle, longtime educator Rev. William Turner and self described “regular guy” Chris Sifford were awarded with the Elizabeth Duncan Koontz Humanitarian Award during the Salisbury-Rowan Human Relations Council’s annual banquet dedicated to the memory of Koontz — a Salisbury native who during her life was a driving force for progress in the field of education.

Sifford has been involved in the community through programs like Tsunami Development, a nonprofit literacy program for young children, and the North Rowan Connection Youth Leadership program.

“To be mentioned in the same breath as Mrs. Koontz speaks volumes,” he said before commending his fellow award winners.

Sifford. a native of Rowan County who was a three-sport athlete at North Rowan High School in the late 1980s, is also one of the founders of the Chamber, a group of African American community activists.

“I do what I do. And I know what I know,” Sifford said, “If you see someone that’s in need, help them. … that’s what I’ve always been about.”

Turner was an educator for 41 years before retiring. He taught young people of all ages, from elementary school to college students.

After his retirement, he helped start the Park Avenue After School Enrichment Program in 2003, and it has continued every year since. He and other retired teachers help elementary students improve in subjects such as reading and math. The program also focuses on building children’s self-esteem.

Turner has been active in the NAACP and other community organizations too.

“I recognize the spirit of God, who has given me this opportunity to serve the community,” Turner said.

He thanked those who have worked with him on the Park Avenue Redevelopment Corporation. He also personally thanked Dr. Mary Frances Edens, who was his principal when he taught at Overton Elementary School.

Eagle retired in 2012 after 32 years at Salisbury High and has remained active in the school system and in supporting young people.

He spoke briefly after receiving the award, talking about the inspiration he received from the woman the award is named for.

She was a person that went forward, he said about Koontz.

“She always moved and let the rest of us be there, and be ourselves, and move with her inspiration to us,” he said, “So this award is especially meaningful to me. Especially tonight.”

Salisbury truck driver returns to Indiana on a mission…