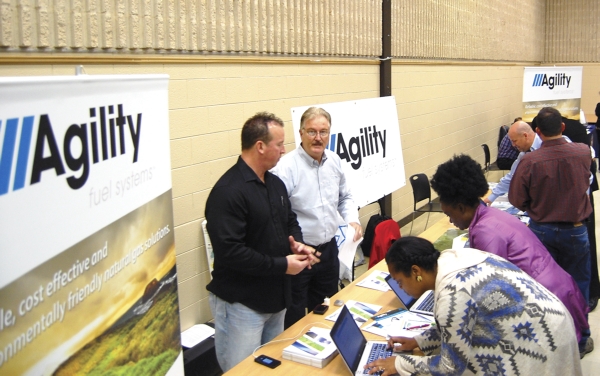 Job seekers fill out their informaton on computers at the Agility Fuel Systems booth during a job fair Thursday at the Salisbury Civic Center. Agility plans to hire 150 people by July for its facility that's currently being built in the Summit Corporate Center.

Ben Peach needs to find a job so he can pay for college and finish earning his degree.

Peach is 22 and lives in Salisbury. He said he’s studying computer science and mathematics at UNC Charlotte, but he hasn’t been taking classes for eight months because he can’t afford to pay tuition.

Grant funds only go so far, he said.

Peach was one of about 300 people who came to a job fair Thursday afternoon at the Salisbury Civic Center. The fair was organized by the Rowan County NCWorks office.

People of all ages were at the fair looking for a job.

Allen Dement, 53, said he used to be a substitute teacher and is looking for a full-time position now that he has a teaching degree from Pfeiffer University.

He’d like to teach social studies or geography, Dement, who lives in Spencer, said.

The Rowan-Salisbury School System had a booth at the job fair, and after visiting it, Dement was browsing other employers. He said he’s been out of work since October, and that his unemployment has run out. He gets by doing odd jobs for cash.

“I’m with the Lord,” he said when asked how he was holding up.

April Gibson lives in Salisbury and said she’s been looking for work for a year. Her last job was with Perdue Farms.

The 30-year-old said she is looking for a supervisor position.

One of the companies at the fair was Agility Fuel Systems, a California-based industry that makes natural-gas fuel systems for transport vehicles. The company will locate in a factory currently being built off Julian Road in the Summit Corporate Center.

Officials with Agility at the job fair said they want to hire 150 workers between now and July. They said they are looking for hourly laborers, maintenance technicians, process engineers and HR professionals.

Debbie Davis, the NCWorks branch manager, said turnout for the job fair was great considering the rainy weather. She said networking is important for job seekers. Talking with as many employers as possible is good because even if someone doesn’t hire you, they may know someone who will, she said.

Peach said he has plenty of experiencing with computer programing. He interned in high school and has tutored other students. Still, he said, it’s hard to find a job in his field without a degree.

But there are jobs out there, he said while standing outside the Civic Center checking his phone — he motioned back inside where the job fair was happening to reinforce his point.

Right now, he said,”I’ll take anything I can get.”