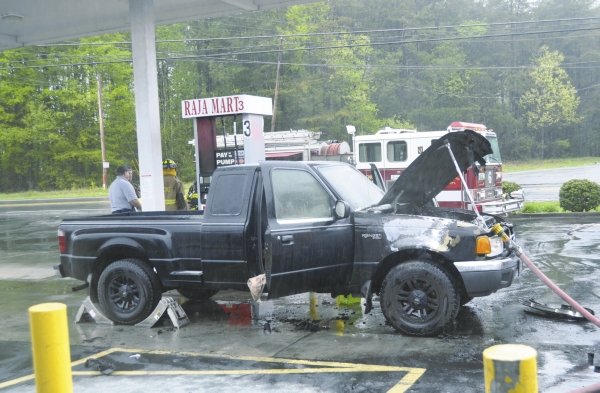 Locke firefighter Tim Flanagan, not shown, was getting gas Thursday at Raja Mart convenience store, 3610 Mooresville Road, when his engine caught fire. He and store co-owner Bharti Shah used fire extinguishers to quell the flames. Locke firefighters arrived on the scene and finished extinguishing the fire, which was contained to the engine. No one was injured. Shavonne Walker/Salisbury Post

A Locke firefighter who was pumping gas Thursday afternoon had to put out a fire inside his own pickup.

Tim Flanagan, a new recruit with the Locke Volunteer Fire Department, was at Raja Mart, formerly Z&H Mart, at 3610 Mooresville Road when his engine began smoking and then caught fire.

Flanagan said his check-engine light had been on for a few days. He had taken the pickup to a local garage and was awaiting a part. He said he believed the 2003 Ford Ranger was OK to drive.

Unsure of what caused the fire, Flanagan stopped pumping gas and went inside the store.

Store co-owner Bharti Shah said at first she was scared because she didn’t see the driver and feared he was still inside the truck. She ran to get a fire extinguisher and had to get another when the flames continued. She called 911 and ran to get her son, who was in the store with her. She made a second call to her husband, who told her to turn off the main emergency switch to the gas pumps.

She feared there would be an explosion, she said, and her son urged her to stay out of the way.

The Shahs have been in this location for about a year.

Flanagan said it was lucky for him that the fire department arrived when they did, because the fire extinguisher quelled the fire, but firefighters had to fully extinguish it.

No one was injured during the incident.

Fire Chief Rusty Alexander confirmed there was no explosion and the fire was contained to the engine area.