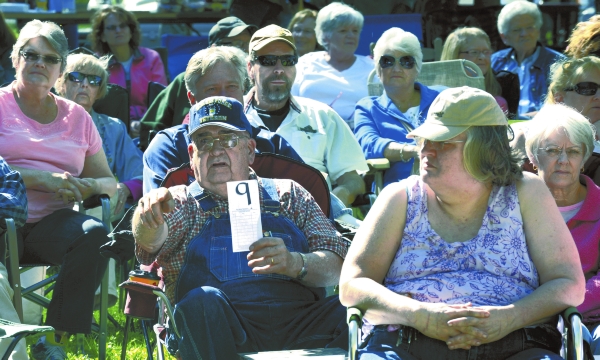 Wayne Hinshaw/for the Salisbury Post Bidder Dave George, from Elkin, holds up his card to cast a bid at the Charles “Pete” and Marie Walker estate auction.

CHINA GROVE — This morning has dawned cool but sunny. A pleasant day. A perfect day, it turns out, for an auction.

All four of Pete and Marie Walker’s children, and most of their grandchildren, have gathered at their two-story log home in the “compound,” a 60-acre spread where most everybody in the family lives.

Employees of Heritage Auction Co. are circulating in the growing crowd, setting out items, getting everything ready for the 10 a.m. start. Auctioneer Glenn Hester is greeting the family and other folks he knows.

Camp chairs and lawn chairs are set up all over the front yard. Glenn’s wife, Daryl, says she’s given out 100 numbers for bidders, which means you can about double that number to count the attendees.

There’s a lot to bid on.

Daughter Debbie Beaver says that as a child, her mother once stood in line to receive a pair of new shoes. Marie swore she’d never do that again.

Years ago, she and Pete started collecting, going to yard sales and auctions and general stores and anywhere else Marie wanted to shop. They amassed such a collection that this morning marks the fifth auction Glenn has conducted for the family.

Nick and Kendall Fulham have attended every one of them. They went to school with Debbie’s daughters, Elizabeth Gillis and Emily Yarbrough.

“We just come to support the family,” Kendall says. “We’ve bought something from every auction. “We have a little piece of Pete and Marie. They were wonderful. They came to all our yard sales.”

Kendall says she wouldn’t be surprised to find something she used to own.

People have shown up early, too.

“They’re scoping things out,” Glenn says. “They might be googling to try to identify an item — the year it was made, its value. As an auctioneer, I want an item to draw the most amount of money, and the buyer wants to pay the least amount. I try to meet them somewhere in the middle.”

There will be one last auction after today. Marie had a business on N.C. 152 near the house called Hog Heaven. It’s pretty much full of stuff, as is her basement, because she once bought the entire contents of a general store.

The word “hoarder” might seem unkind, but it’s not inaccurate, Debbie admits. Before Marie was diagnosed with Alzheimer’s, she continued to buy, her daughter explains, but she couldn’t figure out what to do with what she had. “She couldn’t reason it out.”

Luckily, Debbie and her siblings, sister Rosie Walker and brothers C.T. and Jon, all share the same tastes as their parents.

They’ve all gotten what they want. Some of the grandchildren will even bid this morning.

And they know their mother would be tickled to see others able to enjoy her purchases.

“Daddy loved Momma and he just went right along with it,” Rosie says.

The auctions have not been easy, Debbie says, but each one has been like a big reunion. Pete and Marie owned Peter Pan Daycare in Enochville for 42 years, and this morning, Craig Sellers, who attended the nursery, is on hand for the auction.

“C.T. keeps emailing my wife about these auctions, and that’s not good,” Craig says, grinning.

Some attendees are on the lookout for certain items.

And it is good.

Promptly at 10, Glenn gets to work.

“Please keep up with what you buy,” he says. “We’re going in no particular order. Please give our guys room when they start moving. We have really been selling here and having a great time.”

Soon, the auctioneer’s sing-song voice fills the air, and hands fly as the bidding gets started.

When the house gets cleaned out, Emily and her husband and three children will move in. She hopes that’ll be this summer, but a quick tour of the inside reveals there’s still much work to be done.

“It’s overwhelming, isn’t it?” Emily says, but she’s smiling. “I’ve got my piles stashed away. I’m super excited. Me and Matt just love old stuff. We think the kids are more excited than we are.”

Emily and her sister are surprised when a few items come up for auction. Some of it they’ve never even seen.

A half-hour or so into the auction, Daryl reports that Glenn is averaging about an item a minute — which is quick, but which is necessary at such a large event.

Meanwhile, the Walker kids talk and laugh and eat ham biscuits and drink coffee, and remember two people who loved them and wanted to give them everything — literally.

Collecting is something they have come to love, they say.