Salisbury truck driver returns to Indiana on a mission of thanks 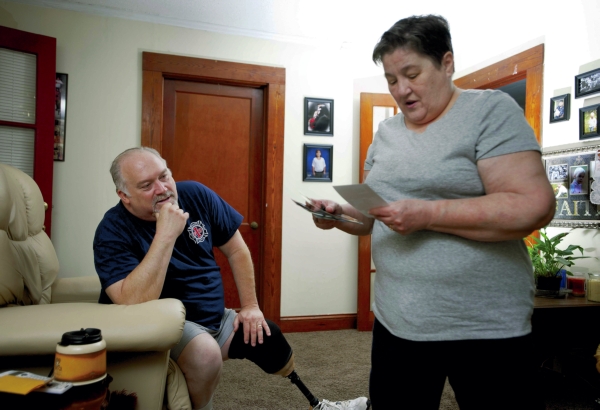 Norman Towell, left, and his wife, Sherry, recall the events of his truck accident in Indiana. Towell eventually had his left leg amputated below the knee. Jon C. Lakey/Salisbury Post

SALISBURY — Norman Towell’s purpose was simple: He just wanted to say thanks in person — not in a card, not over the telephone and not with an email.

Towell and his wife, Sherry, traveled close to nine hours and 625 miles to Indianapolis this past weekend to thank personally the firefighters and medics who extracted Norman from his overturned rig on Oct. 15, 2013.

It took the rescue workers from the Indianapolis and Beech Grove fire departments about a hour-and-a-half to free the Salisbury truck driver from his mangled cab that night. His legs were trapped and entangled in the plastic molding of what had once been the dashboard.

Towell’s left ankle was broken in two places. He also had four broken ribs and a fractured wrist. The broken ankle probably served as a tourniquet and prevented a major loss of blood in his left leg.

When his legs were finally loose and he began to bleed more freely, Towell passed out and only woke up again on his way by ambulance to Methodist Hospital where he would stay and undergo numerous surgeries for 16 days. The imprint of his truck’s steering wheel remained on top of his thighs for three days. He had huge black eyes from where his face must have hit the dashboard, and he sported a sizable blood blister on his shoulder from the seat belt.

Sherry hardly recognized her husband in the hospital bed when she first walked into the room.

“He looked scary,'” agreed 8-year-old granddaughter Bella Figueroa, who was in Indianapolis that weekend after the accident. “He looked like a vampire.”

More operations and time in the hospital at Carolinas Medical Center in Charlotte followed — Sherry counted 30 procedures all told — but Towell lost his left leg below the knee in April 2014. With his new prosthesis, Towell is walking pretty well today, driving his Dodge pickup on errands around town and itching to get back to his big love next to the Lord, Sherry and his big family of seven children and 12 grandchildren — truck driving.

The Towells are Christian people and missionaries. They spent their honeymoon 18 years ago on a mission to Chihuahua, Mexico, for example, so Towell also wanted to leave those guys back in Indiana with something else.

“I told them, ‘Jesus saved my soul from hell, and you saved my life from death,'” he recalls.

Towell also told the men and women he loved them and that he realized they put their lives on the line everyday without being appreciated as much as they should be. There were a lot of hugs, handshakes and a few tears.

“They really had to work hard to get me out,” said Towell, whose trucking-driving handle is “Cuz.” “They worked, man. They worked hard.”

Sherry says a fire captain told her it was the toughest extraction his department had been involved in during his 23 years.

“God took care of me, and we just wanted to thank them,” Norman emphasized again. “The Bible says give honor to who honor is due.”

At noon Saturday, Norman and Sherry Towell met the firefighters and medics at Indianapolis Fire Station 43. A big lunch featuring hot dogs, hamburgers and chicken was laid out before them, and the hosts, grateful the couple would travel all that way just to see them, asked Norman to say grace.

He spent the rest of the afternoon recounting the accident with groups of guys, giving television interviews and even remembering some of that night’s lighter moments.

One of the Beech Grove firefighters who stayed with him in the cab lost his helmet continually as he worked to free Towell’s legs. The helmet kept falling onto Towell’s lap, and sometimes Norman would reach up and put it back on for him.

Once, Towell even patted the firefighter on the cheek and said, “We’ll all get through this. The Lord will help us.”

Norman “Cuz” Towell, 58, has been driving a truck for 26 years. For 21 of those years, he has been employed with Holland Motor Express, and he was based out of the Greensboro terminal.

The night of Oct. 15, 2013, a Thursday, he left Holland’s Indianapolis terminal for home and had reached the junction of Interstate 465 North and I-74 East when a compact car made a lane shift toward him.

As Towell blared his air horn, he managed to avoid the car, but he knew he wouldn’t miss the slowing traffic ahead of him without some evasive actions.

“I was cut off by another vehicle and had nowhere to go,” he says.

With the shipment he was carrying and the full travel weight of the rig itself, Towell guesses he was trying to control 60,000 pounds. He slammed his brakes hard and aimed toward the shoulder, but he heard a fluid line break and lost his steering. The rig jackknifed to the left, straightened for a moment and jackknifed to the right.

He “T-boned” a Ford Excursion as his rig slid on its side toward a grassy median. When rescue crews reached him, he was conscious within his cab, which was lying on the driver’s side. Towell was stuck between the gearshift and dashboard.

During the extraction, the top of his truck’s cab was peeled off like the top of a sardine can, and the thing that finally worked in setting him free was a wrecker’s pulling the weight of the cab away from his legs.

Virtually all the surgeries to come were aimed at saving the bottom part of his left leg, but he was battling an infection in the bone. A surgeon finally gave him a choice. He could go with an amputation below the knee or try two years worth of grafts in trying to save the bone and the leg. But there was no guarantee the bone grafts would work, Towell says.

Within two months of the amputation, he was fitted with his prosthesis.

A broken hip unrelated to his accident slowed his recovery and his plans to return to Indianapolis. He originally wanted to go in February.

The night Norman’s accident happened, Sherry Towell was back home, packing for a trip she planned to take the next day to Gatlinburg, Tenn., with daughter Shellie Fiqueroa and granddaughter Bella. It’s the only reason they were awake when the telephone rang about 12:15 a.m. and a Salisbury Police officer told her he was on the line with Indianapolis, where Norman had been in a wreck.

“I already was as weak as branch water,” Sherry says, remembering that call.

All Sherry could do was turn the telephone over to Shellie, a registered nurse, who talked to a chaplain and said they would leave for Indiana immediately.

Norman and several of his Holland Motor Express trucker buddies were part of a Bible study group, and as word spread among the truckers about his accident, they eventually connected with Sherry, Shellie and the sleeping Bella and led them in sort of a relay system toward Indianapolis. They made their first hookup on the West Virginia Turnpike and the girls’ car “piggybacked” much of the way to Indiana, Towell said.

The Holland Motor Express truckers usually stay at a Quality Inn when they  stay overnight in Indianapolis. The manager of that hotel made sure Sherry and any other members of the Towell family had a free place to stay while Norman was in the hospital. The Towells were overwhelmed by the generosity.

“God worked it all out,” Norman says.

He normally would not have been making this particular trip to Indiana, but he was covering for one of his friends.

Before the Towells left Indiana, the firefighters gave them several T-shirts, hats and coffee cups.

One of the men also stepped forward to present him with the fireproof hood he was wearing on the night of Norman’s accident. On the back of the hood was a cross.

“I’ve been praying for you ever since the wreck,” the firefighter told Norman. “There was just something different with you.”

Workers’ compensation has helped the Towells make it through their ordeal, filling in for his lost wages, providing a ramp out front for all those days he was in a wheelchair and remodeling the bathroom to provide a shower.

Towell says he tries not to dwell on the wreck. This summer, he’ll be trying to take in ballgames with his grandchildren, and he and Sherry also have a long-range goal of taking a vacation someday to Fairbanks, Alaska, a place he lived when his father was in the military.

But he also would love to get back on the road as a truck driver. His grandfather drove a truck in the Army. His father, uncle and great uncles were all truck drivers. For “Cuz,” it’s part of who he is.

Sherry says she just wants him to stay home with her.

“God has a purpose for everything that happened,” Norman says in a moment of reflection. “I just try to keep my mind on my Lord.”