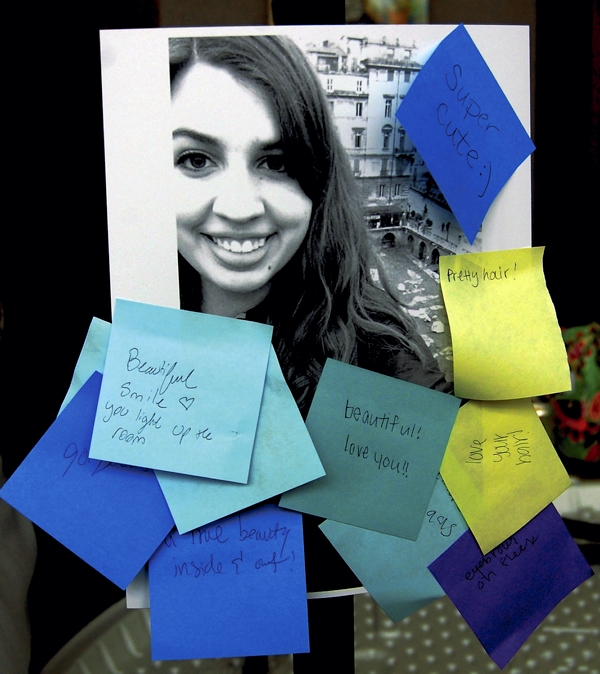 Cannon School students put sticky notes on each selfie telling the girl in the picture how beautiful she is. Jeanie Groh/Salisbury Post

Most women struggle with self-esteem in some way, shape or form, and for many of us, physical beauty is one of the hardest areas in which to feel confident.

This is especially true of high school girls as they transform from awkward adolescence into adulthood.

We judge ourselves against the Megan Foxes, Scarlett Johanssons and Emma Stones of Hollywood.

We try to cover our insecurity with foundation, blush, liner, mascara and lipstick. We contour, curl, tease and braid to try to measure up. We think that the perfect smoky eye or perfectly undone beach waves will make us beautiful.

The truth is, however, we already are.

Three girls at Cannon School in Concord are on a mission to make sure their classmates know just that.

“We were talking about issues that confront girls today,” Frankenberg said, adding that they felt beauty was the one that most girls struggled with.

They realized this and wanted to do something about it.

As they searched for ways to raise their classmates’ self esteem, they came up with the idea of No Makeup Day. They wanted to shift the focus from beauty enhanced by makeup to natural beauty.

The first year, they made a video and showed it on No Makeup Day. The movement caught on and has grown each year.

Last year, the girls introduced the Selfie Project, which they held again this year on Tuesday.

Each girl in grades 9-12, as well as all female faculty and staff were encouraged to send in a photo of themselves.

“The girls were asked to send in pictures where they feel beautiful,” Frankenberg said.

Those photos were printed out in black and white and hung around the Cannon Performing Arts Center.

Then, all the upper school girls were given sticky notes and pens to write uplifting messages to each girl. They stuck the notes on the photos.

This year, there were about 100 photos submitted – about half of the upper school girls, Frankenberg estimated.

The girls thoughtfully went around the room, thinking about what to say about their peers.

The notes ranged from goofy to serious, but they were all positive and affirming.

“Super cute,” “Pretty hair,” “Beautiful smile. You light up the room,” “A true beauty inside and out,” and “I love you!!” were just a few of the notes spotted around the room.

While they held the Selfie Project on No Makeup Day last year, they decided to change things up this year by moving No Makeup Day to Friday.

“This Saturday is our prom,” Frankenberg said.

While all the girls will be donning fancy dresses, layering on the makeup and sporting perfectly crafted hairstyles on Saturday, Frankenberg, Bliss and Bloomquist wanted to remind them that they’re beautiful with or without makeup as they went into their prom.

Bliss said No Makeup Day has had an impact on the three organizers, as well as their fellow students.

“We’ve had some really good discussions,” she said.

Amy Reiss, marketing and communications director for Cannon School, said No Makeup Day and Project Selfie have created a “different climate” in the upper school girls.

Focusing on true beauty is empowering, she added.

“We have a lot of amazing kids here,” she said. “This is completely student run. It’s completely in their court.”

Next year, Bliss Bloomquist and Frankenberg will be off at college, but the tradition will live on at Cannon School.

This year, they passed on the project to several younger girls at the school who plan to implement Project Selfie and No Makeup Day for the years to come.