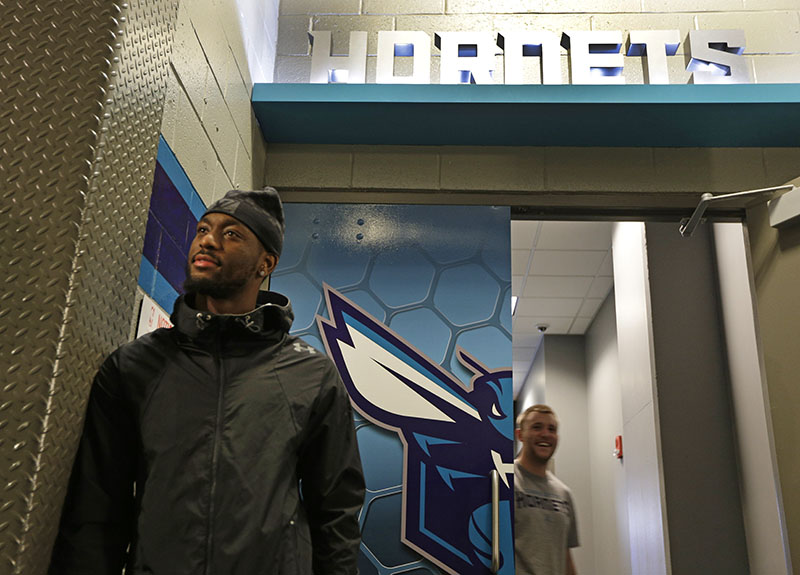 The Associated Press Charlotte's Kemba Walker waits outside the locker room Thursday after the team's end-of-season team meeting in Charlotte. After a disappointing and injury-plagued season, the Hornets must figure out how to get back to the postseason.

CHARLOTTE (AP) — Al Jefferson has no intentions of opting out of his contract with the Charlotte Hornets. Gerald Henderson isn’t quite ready to make the same declaration.

Jefferson is due $13.5 million next season. Henderson, the longest-tenured player on the roster, is set to make $6 million. Both have opt-out clauses in their contracts that would allow them to become free agents.

“Unless something dramatic changes, I don’t see myself opting out,” Jefferson said Thursday.

Jefferson said he has “unfinished business” to attend to after a disappointing and injury-plagued season. Charlotte finished with the ninth-worst record in the league (33-49) this season after making the playoffs in 2014.

The 6-foot-10, 289-pound Jefferson, who has long been referred to as “Big Al” because of his stocky frame, said he plans to come into training camp next season in better shape. He wants to drop 20 to 25 pounds to alleviate stress on his knees and feet.

Jefferson missed 17 games this season due to knee and groin injuries and averaged 16.6 points and 8.4 rebounds per game. He averaged fewer minutes per game than the previous season when he was named third-team All-NBA and averaged 21.8 points and 10.8 rebounds.

“I wasn’t the player I need to be to get this team to the next level,” Jefferson said. “I’m still a young man with a lot of great basketball in me. … I’m disappointed in myself. I’ve got to redeem myself.”

Henderson, who has spent all six NBA seasons in Charlotte, said he “hasn’t even thought about” his contract situation.

The Hornets have plenty of work to do between now and next season.

Head coach Steve Clifford acknowledged Thursday the Hornets “took a step back” in his second season at the helm.

Charlotte finished last in the league in 3-point shooting and second-to-last in field goal percentage.

However, Clifford doesn’t anticipate the team making a splash in free agency.

Last year, the Hornets turned to Lance Stephenson. But he was a major disappointment.

Stephenson said he lost confidence in his jump shot.

“I just wanted to make the shot so bad and when it doesn’t go in you just lose your confidence,” said Stephenson, who went from starter to out of the rotation. “That plays a major part when you don’t have confidence in your shot. This summer I am going to find my confidence and come in a better player.”

He acknowledged the Hornets aren’t close to competing for an NBA championship, but added “to take a step to be a playoff team, I don’t believe we need a ton” of help.