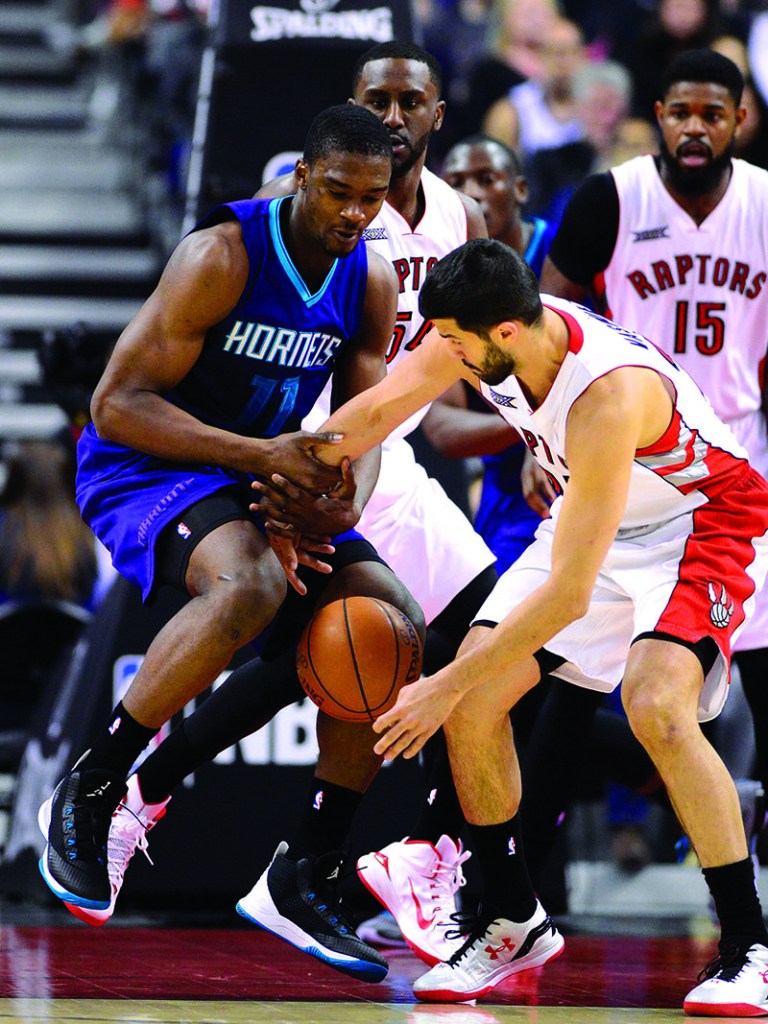 The Associated Press Toronto's Greivis Vasquez, right, steals the ball from Charlotte's Noah Vonleh (11) during the first half Wednesday in Toronto. The Hornets, playing their first season since changing the team name from the Bobcats, lost the final six games of the season and missed the playoffs.

TORONTO (AP) — DeMar DeRozan and the playoff-bound Raptors are ready to show Washington’s Paul Pierce that they have it.

Kyle Lowry scored 26 points and the Raptors wrapped up the regular season with their franchise-record 49th victory, beating the Charlotte Hornets 92-87 on Wednesday night.

“This is what we play for,” Lowry said. “Now it’s the time where it gets a little bit more serious.”

Chicago’s victory over Atlanta meant Toronto finished fourth in the Eastern Conference, matching the Raptors with Pierce’s Wizards in the first round of the playoffs. Toronto will host Washington in Game 1 on Saturday.

Pierce, who blocked Lowry’s shot in Game 7 of Brooklyn’s first round win over Toronto in last year’s playoffs, said Tuesday that the Raptors don’t scare him even though the Wizards went 0-3 against Toronto this season.

“We haven’t done particularly well against Toronto, but I don’t feel they have the ‘It’ that makes you worried,” Pierce told ESPN.

Jonas Valanciunas added 18 points, DeRozan had 16 and Terrence Ross 13 for the Raptors, who won four of their final five games.

“The real season starts this weekend, what we’ve been building for,” coach Dwane Casey said.

Tory Daniels scored a season-high 24 points for Charlotte. Kemba Walker had 17 points, and Gerald Henderson 15 for the Hornets. They lost their last six games to finish at 33-29. After holding the No. 7 spot in the Eastern Conference on March 8, they lost 15 of 20 to fall out of postseason contention.

Hornets coach Steve Clifford predicted the Raptors will be “a handful” for the Wizards.

“They’re very well coached, they have a number of ways to score and (Casey) is going to know how to prepare them defensively,” Clifford said.

Lowry went 1 for 13 from 3-point range in his first two contests after missing seven straight games with back spasms. After going 2 of 4 on Tuesday night in a loss at Boston, he was 6 of 9 against Charlotte.

“It feel great,” Lowry said. “Good game for me to go into the playoffs off of.”

DeRozan returned to the starting lineup after sitting out Tuesday to rest his sore right groin. DeRozan missed 21 games this season after suffering a torn tendon in his left groin.

Walker scored nine points in the first quarter, but Ross had seven and DeRozan six to help Toronto take a 25-20 lead.

Lowry hit three of Toronto’s six 3-pointers in the second and the Raptors closed the quarter with a 17-4 run to lead 55-44 at halftime.

Valanciunas scored 10 points in the third, making five of six attempts, to help Toronto take a 78-67 lead into the fourth.

Raptors: Williams got the night off to rest. … In the final tribute of their 20th anniversary season, Toronto honored former Rookie of the Year Damon Stoudamire. The first player drafted by the Raptors, Stoudamire received a standing ovation following a video tribute late in the first.