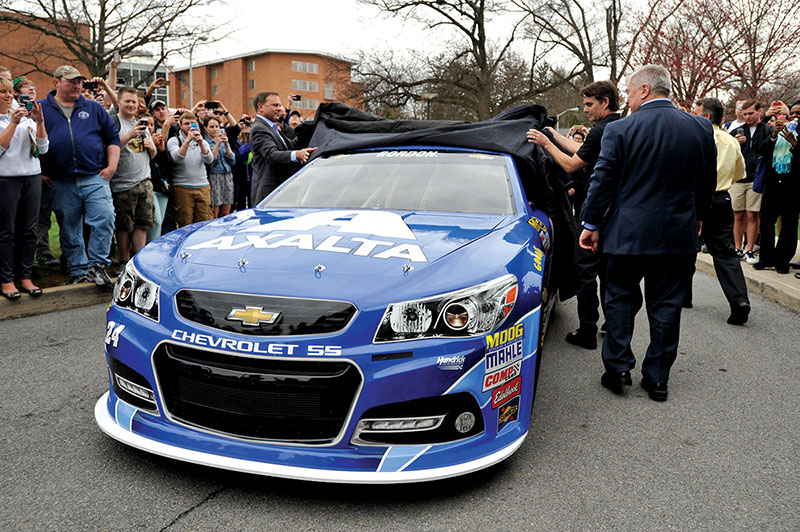 The Associated Press Jeff Gordon, right, helps pull back the tarp Tuesday to unveil his street version of a blue and white Penn State race car on the school's campus in State College, Pa. The car will race in June at Pennsylvania's Pocono Raceway.

STATE COLLEGE, Pa. (AP) — Jeff Gordon slid into a street-legal version of his race car and set out for a slow cruise with a passenger who had no idea what kind of ride the four-time NASCAR champion had in store for her.

There was nothing ordinary about this drive in the No. 24 Chevrolet. Gordon revved his engine and peeled away as he put on a show for a large crowd of fans chasing him as he drove through the Penn State campus. He ended the ride in front of Penn State’s Berkey Creamery, and even led the enthusiastic crowd on a “We Are! Penn State!” cheer.

His appearance Tuesday was to debut a special paint scheme that he’ll drive at the June event at Pocono Raceway. The blue and white car had Penn State displayed prominently on it, part of a program being run by Gordon sponsor Axalta Coating Systems. The company teamed with Penn State to promote the importance of science, technology, engineering and math.

“We’re starting to see kids who before, were just going through school, are now viewing the potential for a career in a lot of different ways,” Axalta CEO Charlie Shaver said. “For us as a company, if we can just get them out there, and they see what they can do in a global environment, they see the possibilities.”

The program drew large crowds at each of Gordon’s stops on campus, and when he drove off with Olga Vinogradova, a junior in chemical engineering, fans sprinted after his car and cut across the campus to meet him at the creamery. Gordon joked that Vinogradova was taken aback by the power of his 3,400-pound stock car.

“I’ve had a chance to see many Penn State students out at Pocono over the years,” Gordon said. “I know they are not only some great engineers and future business leaders here at this school, but a lot of race fans and people that are going to take advantage of this opportunity and this relationship.”

Axalta recently announced a multi-year contract with Pocono Raceway that makes the June race at the track the Axalta “We Paint Winners” 400. In addition to Gordon’s special paint scheme, 100 Penn State students will participate in a special program during the race weekend with Gordon and Axalta, which is headquartered in Philadelphia.

ANDRETTI HONORED: Mario Andretti is part of the newest class of honorees into the Superman Hall of Heroes, a venture by Warner Bros. Consumer Products and DC Entertainment.

The new inductees join thousands of everyday heroes who have been nominated for the Superman Hall of Heroes, an online gift-giving portal that empowers consumers to honor those who have made a positive impact on their lives or the lives of others.

Andretti is part of a class that includes Kyle Carpenter, the youngest Marine to be decorated with the Medal of Honor, Sean McComb, one of the youngest National Teachers of the Year, and John Walsh, the victims’ advocate and host of “America’s Most Wanted.”

Andretti praised the Superman Hall of Heroes for the attention it gives good deeds.

“What I like is that it focuses on the positives and it reinforces the universal tenant that good does triumph over evil,” said Andretti, who said he occasionally delivers Meals on Wheels and is celebrated for the effort, “but it’s not about me. There is an individual who drives me around and he is out there every day, in snow, ice on sidewalks, back alleys, and this individual who does this sort of thing — those are the real heroes.”

The two were chosen by a panel of more than 100 industry veterans and bring the total to 150 individuals recognized for their contributions to auto racing. They’ll be honored in May at the Auto Racing Hall of Fame, which was founded in 1952 and is located at the Hall of Fame Museum at the Indianapolis Motor Speedway.

Casey’s career started with building midgets and modified race cars. He next produced winning race cars for the Indianapolis 500 under Fred Gerhardt, as his chief mechanic. Casey was a nine-time winner of the National Championship competition of the United States Auto Club (USAC), crew chief for Janet Guthrie, the first female driver to qualify for the Indianapolis 500 in 1977, and worked with Roberto Guerrero in 1985 and 1986 and A.J. Foyt in 1990.

In 1996, he took on the role of Senior Technical Director for the IRL, just as the sanctioning body was formed. He has been recognized for extraordinary contributions during the formation of the IRL, including the development of the now industry-standard Steel and Foam Energy Reduction (SAFER) Barrier.

George currently serves as the chairman of the Board of Directors of Hulman & Company and serves as a director of the Foundation. A longtime supporter of auto racing and the Indianapolis Motor Speedway, which is owned by her family.