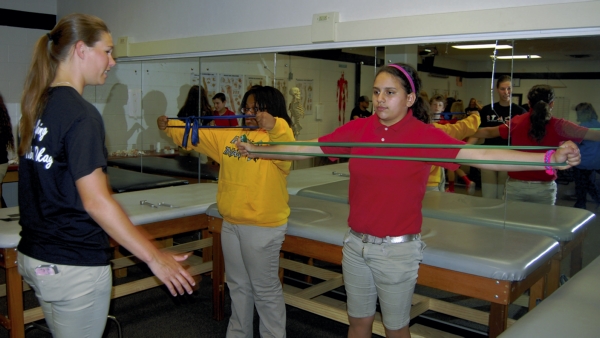 When should students start thinking about college?

The earlier, the better, Knox co-principals Dr. Mike Waiksnis and Dr. Latoya Dixon would argue. That’s why they made sure that every single Knox Middle School student stepped foot on a college campus this year.

“We want to make sure all our students have an opportunity to see what college life is like,” Waiksnis said.

“After three years, they will have visited at least three schools,” Waiksnis said.

“College is not a dream, but a plan,” she said, adding that the earlier students start planning, the more opportunities they will have when it comes time to apply for college.

Holden planned the college tour for the sixth-graders who visited Catawba.

The students attended sessions on athletic training, mosquito research, crawfish and other STEM — or science, technology, engineering and math — subjects.

The sessions exposed Knox students to careers and fields of study they might not have realized existed. They were also able to see how their passions could connect to a future career through college.

“You don’t necessarily need to be a player in the game,” she said. “You have other ways to be involved.”

Fernanda Torres, a sixth-grader at Knox, said visiting Catawba helped give her some direction as she looks into colleges and fields of study in the future.

“I liked athletic training,” she said.

“It kind of changed my mind about what I want to do when I go to college,” he said, adding, “I’m pretty sure I’m going to come here (Catawba).”

The Knox students also went on an interactive walking tour of the campus.

Holden said that in addition to showing them around campus, she wanted to help them learn about what they will find on any college campus.

“You have to walk to each class,” Torres said. “They walk so far.”

These college tours are only a piece of what Waiksnis and Dixon are doing to bring about college awareness amongst their students.

Earlier this year, Knox hosted a college week for its students, where they focused on college all week long.

“We wanted to make them more aware,” Stukes said, adding that they taught them basic ideas and terminology tied to college.

“We’re really trying to build a college-going culture,” Waiksnis said. “We know a lot of our students don’t have college on their mind.”

He added that many of Knox’s students don’t have family members who attended college, or don’t see it as a possibility for them.