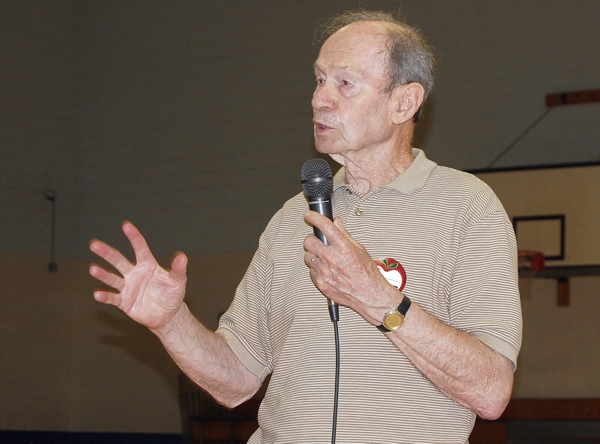 The Council of the Holocaust provides teacher workshops and educational resources for public schools across the state. Before spring break, the school hosted the Kindertransport exhibit which tells the story of rescue efforts to save children from Nazi attack during the war.

Christina Brayton, media coordinator, said that the school received 60 free copies of “Night,” a book written by Elie Wiesel, from the Council of the Holocaust. The book tells of the author’s personal experience in Nazi concentration camps. The books are being used in classrooms as part of the curriculum.

“The Council of the Holocaust provides so many free resources for schools,” Brayton said. “The exhibits make it ‘real’ for the students. It is a once in a lifetime opportunity for them to hear a survivor speak.”

During his speech, Harel told about how he survived the Holocaust. Only 14 years old at the time, he would have been killed according to rules the Nazis set. Only people between the ages of 15 and 50 were allowed to live and work in the camps.

“I was a little tall for my age, so I told them I was 17,” he said. “I’m asked many times how I survived, and the answer is, I really don’t know. You just have to believe you can, and that is what I did.”

Out of his entire family, only he, his brother and three cousins survived.

“Over 11 million people died,” he said. “You did all you could to help someone survive, and they did all they could to help you,” he added.

Ashley Lore was very attentive during the presentation. “When you read things it doesn’t really seem real, but when you can hear it in person, it makes it real,” she said.

“He had a lot to say. There were some really tough times,” Michael Cartwright said.

Harel travels all over the state to speak to schools and community groups. “In life, you have to do all that you can do to make a difference. I feel like I have to share my story until I am unable to breathe,” he said.

Harel currently lives in Greensboro with his wife, Bernice.