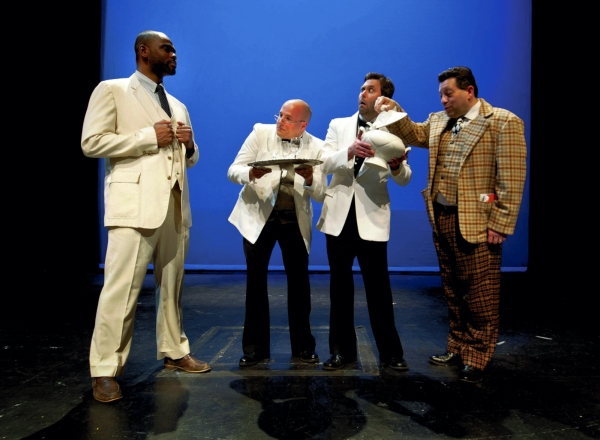 An award winning English adaptation of Servant of Two Masters, “1 Man 2 Guvernors” is a glorious celebration of British comedy — a unique, laugh-out-loud mix of satire, songs, slapstick and glittering one-liners.

After being fired from a skiffle band in 1960s Brighton, an easily confused Francis Henshall, played by Catawba College president Brien Lewis, becomes separately employed by two men — Roscoe Crabbe (Erin Fanelly), a local gangster and Stanley Stubbers (Scott Teeter), an upper class criminal. Francis tries to keep the two from meeting, in order to avoid each of them learning that he is also working for someone else.

It turns out that Roscoe is actually Rachel Crabbe in disguise, her twin brother Roscoe having been killed by her lover, who is none other than Stanley Stubbers. Mixed in with these chaotic events is Pauline Clench (Sarah Hallett) who was originally meant to marry Roscoe but is now set to elope with over-the-top amateur actor Alan Dangle (Austin Young).

The play includes sides-splitting improv when Francis interacts with the audience by getting members on the stage to help him move a trunk as well as asking them for suggestions on where he should take Dolly (Sara Lee) on their first date.

The role of Francis was made famous by British actor James Corden, who won the 2012 Tony Award for Best Actor in a Play for his performance in the Broadway run of the play. You may recognize Corden as the Baker in the film adaptation of “Into The Woods” and as the recent successor to Craig Ferguson as the host of The Late Late Show on CBS.

“One Man, Two Guvnors” also makes use of music by having a band in the auditorium that plays as the audience enters before the production and during the intermission. In the form of a 1960s band similar to the Beatles, The Craze (Graham Carlton, Tripp Edwards, Scott VanHatten and David Edwards) take to the stage between scenes and throughout the show, occasionally joined by the actors themselves playing car horns, the xylophone and the ukulele.

Other cast members include Jim Moyer as Charlie “The Duck” Clench; John Snell as Harry Dangle; Marvin King as Lloyd Boateng; Ben Thomas as Alfie; and Frederic Schuttenberg as Gareth.

‘The funniest show in the western world,’
Daily Mail

‘A triumph of visual and verbal comedy.’ The Guardian