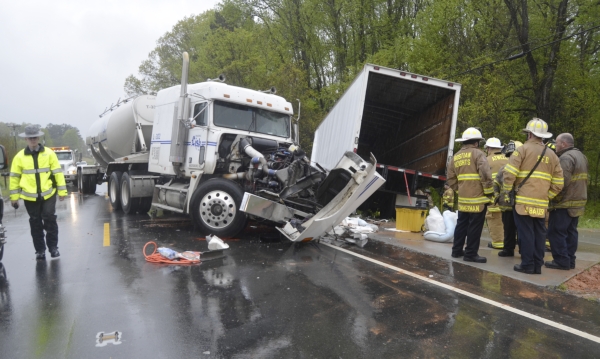 Shavonne Walker/Salisbury Post Fire departements, N.C. Highway Patrol and a haz mat crew responded to this accident where a Lisk Inc. tractor trailer, left, and a box truck carrying mail, collided on N.C. 152, near Forrest Abbey Lane in China Grove. Both trucks had diesel fuel leaks, some of which spilled onto the ground. The tractor trailer was empty at the time of the accident. Both drivers suffered non-life threatening injuries.

CHINA GROVE — A tractor trailer and a box truck, carrying mail, collided during a crash in the 1900 block of N.C. 152, not far from Forest Abbey Lane.

The crash occurred around 3:17 p.m. on Wednesday, after a man made a left turn into her driveway and the vehicle behind her slammed on its brakes, said N.C. Highway Patrol Trooper S.L. Herrin.

The tractor trailer with Lisk Inc., driven by Kennie Gilmore, 62, slammed on his brakes. He was heading east on N.C. 152 and nearly jackknifed, said Trooper Herrin.

Gilmore crossed the center line and struck the mail box truck heading west. The mail truck was driven by Jeffrey McLeod who did not suffer life-threatening injures. McLeod was wearing his seatbelt. Someone from the U.S. Postal Service loaded the mail into another truck.

Gilmore was charged with failure to maintain lane control, according to Herrin.

The Lisk truck was empty at the time of the accident, authorities said later. There was diesel fuel leaks from both trucks. Haz mat and fire crews pumped the remaining fuel from the trucks through a diesel transfer pump and placed it into metal drums.

The fuel that leaked from the trucks was soaked up using boons and pads placed on the ground nearest the trucks. Firefighters were seen digging dirt on the roadside to make a dam to stop the the flow of fuel.

Basinger said firefighters with Atwell, Landis and China Grove responded to the scene. Members of the Rowan-Salisbury haz mat team responded along with the Rowan County Fire Marshal’s Office.

It is not clear at this time what hazards may stem from the diesel fuel leak.

Two weeks ago, a tanker overturned on Bringle Ferry Road, spilling ethanol from the vehicle. The driver, James Sechler of Mooresville, died in that crash. The clean up efforts continue in the incident and that portion of Bringle Ferry Road remains closed.