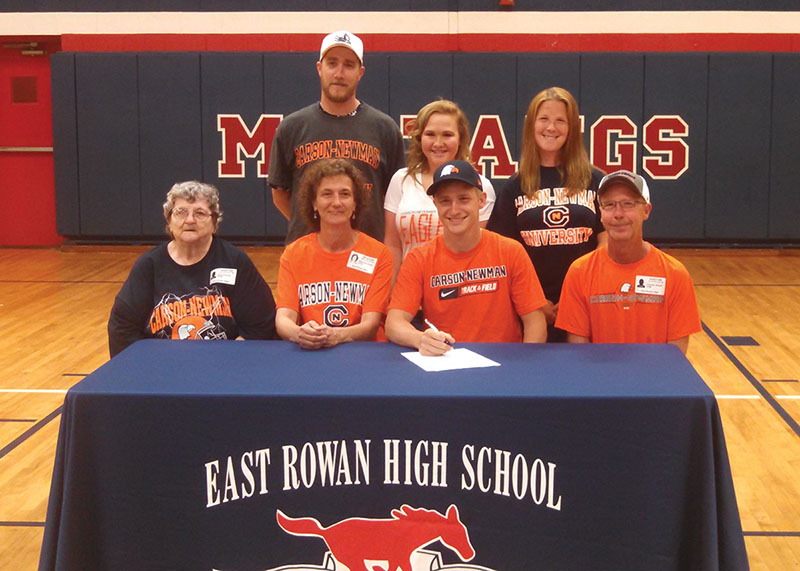 The past, present and future of East Rowan pole vaulting mean everything to Shank. He’s kept a tradition going, and he wants to see East’s pole vaulting dominance continue.

Shank’s present includes leading East Rowan’s 1-2-3 finish in the event that was instrumental in holding off West Rowan in Tuesday’s Rowan County Championship. Shank’s future could include a 3A state championship.  He’s among the state’s best and topped 15 feet in a recent marquee meet in Columbia, S.C. He’s had near misses recently at 15 feet, 6 inches.

Shank’s future also will include competing for Carson-Newman track and field. He signed with the Eagles on Wednesday.

“The academics are great at Carson-Newman, but the coaching I can get is what really did it for me,” Shank said. “Carson-Newman’s goal to be a big factor nationally in Division II.”

Short and compactly built, Shank looks like a wrestler, and his first athletic success actually came in wrestling. His wrestling coach at Erwin, Glenn Snowden, also was his track coach. Snowden steered Shank toward pole vaulting.

“He asked me if I played baseball,” Shank said. “I told him I didn’t. He told me I was going to be a pole vaulter.”

Shank cleared 9-feet, 6-inches as a seventh-grader and was hooked. He made the quantum leap to 12-6 as an eighth-grader.

Shank was Rowan County champion as a freshman, clearing 13-9. His sophomore year he repeated, topping 14 feet. An injured rotator cuff set him back as a junior, and he didn’t clear a height in the county meet. But on Tuesday, he returned to the top of Rowan pole vaulting with his third county title.

Shank has been a conference champion three straight times (twice in the NPC, once in the SPC), with another SPC meet coming up next week at East Rowan. He’s been 3A Midwest Regional champion twice, winning in 2013 and 2014. He’s placed in the top four in the pressure-packed 3A state meet three straight years.

This year’s 3A Midwest Regional Meet is at Weddington on May 2. The 3A State Championships will be held at North Carolina A&T in Greensboro on May 8.

“Our regional always is the toughest, and only four guys will advance from it.” Shank said. “That’s tough, but if you make it through the regional, you’ve got a chance at state.”

Shank’s coaches at East Rowan, past and present, agree he’s been one of the special athletes in the track program.

“He’s one of the leaders on our team, whether it’s bringing energy running conditioning sprints or helping his teammates improve,” East Rowan coach John Fitz said. “This team would be in a different place without him.”