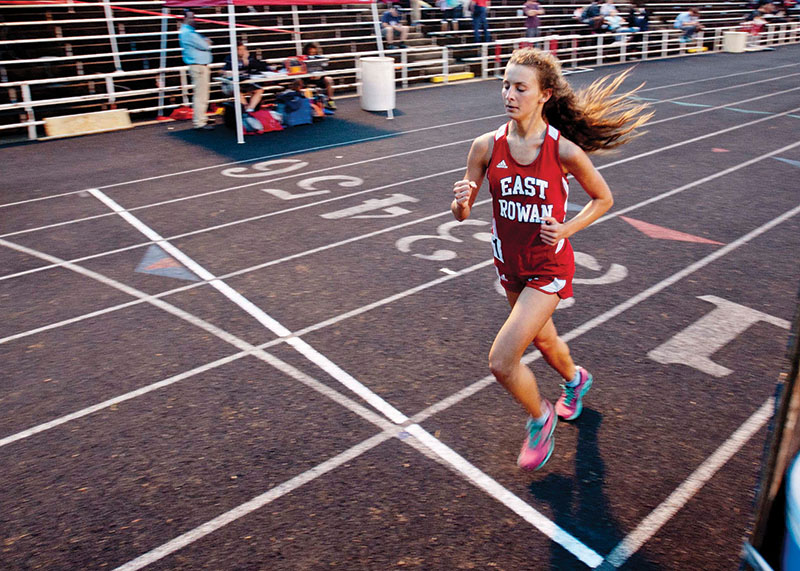 GRANITE QUARRY — East Rowan girls track coach Laurie Wyrick expected the Rowan County Championship Meet to be tighter than it turned out to be.

The Mustangs always get one point for wheelchair athlete Taylor Kirk’s effort in the shot put, and Wyrick thought that point might be the difference. Her projection based on pre-meet performances was East Rowan 150, West Rowan 149.

North Rowan had individual phenoms. Dazzling sophomore Payton Russell swept the 100-meter, 200-meter and 400-meter dashes for Sprint MVP honors. North Rowan sophomore Brianna White won the 100 and 300 hurdles. Then Russell and White teamed up to help the Cavaliers win the 4×400 relay on the last event of the day to snatch second place away from the Falcons.

“The biggest surprise for me was winning the 100 because it’s the first time I’ve run it this year,” Russell said. “I got hurt in indoor track, and I’m just now getting back. I got off to a bad start in the 100, but I won.”

“I told Payton it was OK if she beat me, but I didn’t want her leaving me,” Hall said with a laugh.

West Rowan’s Josie Heglar is as versatile an athlete as the county has. The cross country star won the 800 and 1,600 and helped the Falcons place first in the 4×800 and third in the 4×400. Heglar scores a lot of goals for West Rowan soccer and is only part-time in track, but she earned Distance MVP honors.

“A lot of weeks we play three soccer games,” Heglar said. “There’s also one track meet a week, so I usually get to practice something one day a week.”

“As a group, we really pushed it today,” Owens said. “We ran in a lot of events and we had a lot of personal records.”

The Mustangs didn’t have any multiple-event winners or MVPs, but they won with depth.

“North and West had awesome people,” Wyrick said. “But we just chipped away a point at a time. We had three girls clear a height in the pole vault and that was huge. We had distance girls finishing third or fourth when they were projected to finish fifth. It all adds up.”

Multi-dimensional runners Faith Blume and Haley Lyerly were keys for the Mustangs. Blume said the Mustangs’ distance runners benefited from the coaching expertise of veteran Rick Roseman, who worked with East Rowan’s boys for years.

“We had a lot of people telling us we weren’t going to win this meet,” Blume said. “That really motivated us to win and we wanted to win it by a lot. The goal was to leave it all on the track and we did.”

East Rowan’s most exciting 10 points came when it nipped West Rowan in the 4×200. That unit was Lyerly, Leigha Bennett. Tashera McCoy and Shelby Lowe.

“It was close the whole way,” Lowe said. “I was screaming for Tashera coming down the backstretch, and then it was my turn, and I just went as hard as I could for my team. The hardest part was waiting to run.”

There were obstacles for the athletes. There were period of rains mixed with stretches of sunshine, and participants warmed up, got cold, and then had to warm up again. But the meet beat the weather and the Mustangs beat the opposition.

“We practiced every day we could’ve practiced,” Wyrick said. “This was hard, but it was a good hard.”