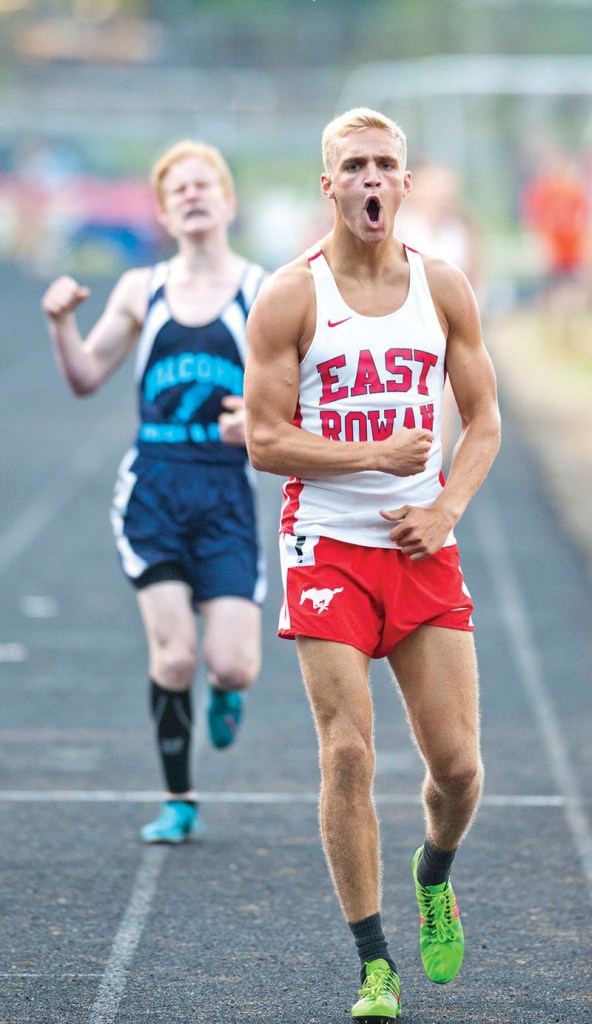 GRANITE QUARRY — East Rowan’s seniors had never lost a Rowan County Championship Meet, and they weren’t about to lose this one.

The Mustangs finished off their fourth straight title in style Tuesday by winning the 4×400 relay. Josh Little, a perennial standout in the 100 and 200 was asked by coach John Fitz to attempt the 400 recently, and he has done so.

Little started that winning relay with a blazing 52.3 split before collapsing, every ounce of energy drained from his body.

“That was everything I’ve got,” said Little, who plans to sign with Western Carolina.

Willie McCree and Devaniel Dale took the baton next, and then Conor Honeycutt, the face of the program for four years, whirled around the track to win by more than six seconds. Then he hugged teammates and bounced  around the infield in celebration.

“We knew we had the meet won after the 3200,” Honeycutt said. “We came very close to the school record in the 4×4, and it was just a great feeling to be the one who brought it home for us.”

“We lost a meet at West Rowan a few weeks ago, and that’s something that hasn’t happened here in the regular season in four or five years,” Fitz said. “We didn’t want that to happen again. We’ve got great kids. When you challenge them, they respond.”

Sanders won the 100, 200 and 400 and was named Sprints MVP. Carson’s Brenden Westbrook, who won the long jump and placed in the high jump and triple jump, was named Field MVP. Carson’s Zachary Marchinko, who cruised in the 3,200, topped Honeycutt in a ferocious 1,600, and helped Carson win the 4×800, was crowned Distance MVP.

East Rowan also got a win from Honeycutt in the 800 (2:01.59) and a victory in the triple jump from football star Max Wall.

It was still tight between East Rowan and West Rowan until the pole vault results were posted. The Mustangs went 1-2-3 there, with senior Marshall Shank clearing 14 feet to win. Teammates Lee Sharum and Jake Boltz followed. That meant 24 unanswered points in an event where the Falcons had zero.

“We did what we needed to do where we expected to do well,” Fitz said. “The pole vault put us over the top.”

For Shank, it was a sweet victory. Rowan County champion as a freshman and sophomore, he didn’t clear a height in the county meet as a junior.

“This was redemption,” Shank said.

For all the Mustangs, including Honeycutt who plans to enter military service rather than compete in college, it was a day they’ll remember with pride.

“This one felt a little different than the others because I’ve got so much experience now,” Honeycutt said. “The seniors weren’t going to let it get away.”