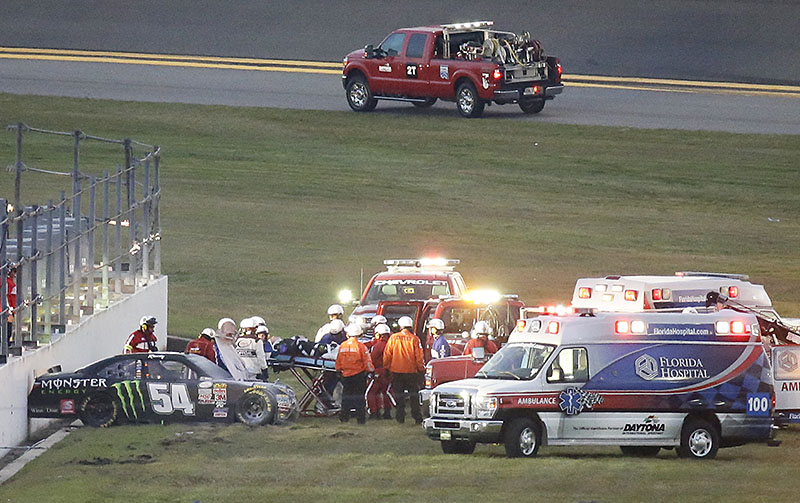 The Associated Press In this Feb. 21 file photo, Kyle Busch, center, is taken to an ambulance on a stretcher after he was involved in a multi-car crash during the Xfinity series auto race at Daytona International Speedway in Daytona Beach, Fla. He knew it was going to be bad when his car slid through the grass into the wall, and he knew immediately that both his leg and foot were broken.

HUNTERSVILLE, N.C. (AP) — As he pulled off pit road at Daytona International Speedway moments before the season-opening Xfinity Series race, Kyle Busch said he looked to the left and noticed for the first time a concrete wall along the race track.

“If someone hits that, it’s really going to hurt,” he recalled thinking that day.

Roughly two hours later, it was Busch who slammed into that wall in what he called “a whale of a hit, the hardest I’ve ever had.”

The NASCAR driver broke his left foot and right leg in the Feb. 21 crash, which has sidelined him for an undetermined length of time.

In his first news conference since the accident, Busch on Wednesday entered Joe Gibbs Racing on both feet. He’s out of a wheelchair and off crutches, making a large gray walking boot on his left leg the only indicator that Busch is even injured.

He took the assembled crowd frame-by-frame through a video of the crash, and had a sharp recollection of the accident and everything he thought and did inside the car as it hurtled toward the wall that was not protected by an energy-absorbing SAFER barrier.

He said he left the racing surface at 176 mph, and had slowed only to 90 mph when he hit the wall. Busch said he knew he was likely going to break one leg and removed his right foot from the brake pedal.

“I am bracing for the hit now, and I put both feet on the brake pedal,” Busch said as he slowed video of the accident. “I thought, ‘Why do I want to break both legs?’ So I took my right foot off, but kept my left foot down.

But the hit was so hard, Busch said, that both his helmet and chest area slammed into his steering wheel. He said the throttle stop was pushed back closer to him and smacked his right leg, breaking it.

Busch took responsibility for the accident, saying he was being greedy when he tried to push Joe Gibbs Racing development driver Erik Jones in an effort for either himself or Jones to win the race. But he wasn’t properly lined up to push Jones, which set in motion the accident.

He knew it was going to be bad when his car slid through the grass into the wall, and he knew immediately that both his leg and foot were broken. The wind knocked out of him, he initially thought he would sit in the car and wait for help.

A flash fire forced him to climb out of his window, and he said he four times alerted safety workers to the extent of his injuries. Since then, he has seen the crumpled car and video of the accident numerous times.

“I’m thankful it wasn’t worse. I could have had a serious neck or head injury, or even worse,” he said.

There’s no timetable for his return. Busch said he won’t rush his way back into the No. 18 Toyota because, with his 30th birthday approaching next month, he’s got a long career ahead of him.

He also believes he’s handled his time out of the car well, and praised wife Samantha, “my rock,” for her assistance during his recovery. They are expecting their first child, a boy, next month and Busch said they’ve found a silver lining in spending extended time together preparing for the arrival.

“It stinks to be sitting on the sideline,” Busch said. “It hasn’t been traumatic, it had been a very difficult time in the beginning, but we dealt with it.”

What his racing schedule will look like upon his return is unclear. Busch races at all three of NASCAR’s national levels, but said his immediate priority has got to be on getting back to Sprint Cup competition.

Racing again in the Xfinity Series, where he drives for JGR, or the Truck Series for his own Kyle Busch Motorsports, will be a “wait-and-see decision.

“The first time I tried to walk, I about passed out,” he said. “So we’ll play it out and wait and see how I feel.”

Busch also praised NASCAR and the race tracks for the renewed focus on safety since his accident. Daytona immediately said it would update its SAFER barriers after Busch’s accident, and nearly every week another track reveals plans to protect walls with tire barriers until the steel-and-foam walls can be installed where needed.