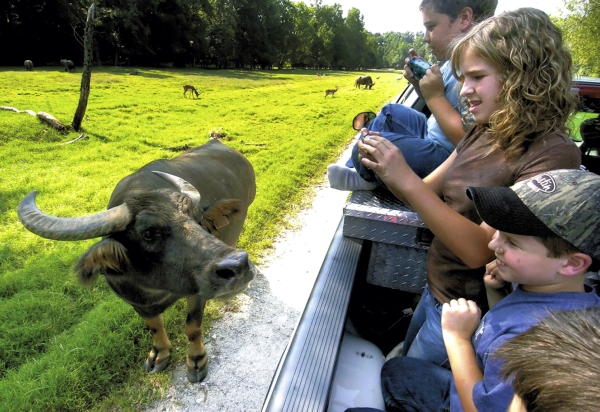 In a 2006 file photo, siblings Riley, 9, (bottom), Emily, 14, and Bradley Walker, 12, of Winston-Salem get up close and personal with a swamp water buffalo at the Lazy 5 Ranch. The Rowan ranch came in second in state field-trip attendance in 2015-16 after being first for five years.

The U.S. Department of Agriculture has issued a number of citations for Lazy 5 Ranch including injured animals, inadequate shelter structures and expired drugs found at the facility located on Mooresville Road. The citations and a subsequent March 18 inspection includes a number of items the drive-through zoo has to fix before becoming compliant, reports said.

The citations were the result of a complaint filed by the People for the Ethical Treatment of Animals (PETA). This is not the first time the USDA has inspected Lazy 5 Ranch following a complaint by PETA, which has been reporting issues at the ranch for nearly 10 years.

The citations were issued March 17 and an inspection occurred the next day. Some of the issues mentioned in the citations have until the end of the week to be corrected, while the majority required action by the end of March.

“It’s time for the agency (USDA) to step up and slam the doors on this hell hole for good. They are clearly not providing even the minimum standard of care. They should surrender every animal to reputable animal sanctuaries,” said Brittany Peet, deputy director of captive animal law enforcement.
Peet said complaints PETA receives originates with citizens who’ve been to Lazy 5 Ranch and contact them about what they’ve seen. This PETA complaint originated with a citizen phone call.

She added that the USDA continues to “document extreme neglect” by Lazy 5. Some of the issues were brought up in previous inspections and have not been addressed, she said of a isolated adult lemur that was not given toys or other enrichment activities while by itself.

In April 2014, Lazy 5 Ranch failed to provide a lemur with some type of toy or item for stimulation to “ensure psychological well-being.” The same concerns were brought up in the March 2015 inspection.

Other inspection concerns include:

• Ventilation — a strong urine odor was present in a stall of the giraffe barn. The stalls were not cleaned out on a regular schedule as needed, the report said. Two ceiling fans only push warm air towards the floor during cooler months, a caretaker told inspectors. The stall also has no windows. The facility was given a March 31 deadline to correct the problem.

• Incomplete records — the dates of death and the date animals were sold. Inspectors said the name, address, USDA license number or vehicle and driver’s license number and state were not included in records. The facility must have complete records in order to be in accordance with the Animal Welfare Act. This issue, according to the citation, is a repeat problem.

• Inadequate veterinary care — in the drive-through portion of the facility a female mouflon, or wild sheep, appeared to be limping. The animal had a slow, irregular gait, as well as a possible wound on its side. Lazy 5 employees were not aware of the wound. A pregnant camel seemed to have difficulty breathing. She had severe swelling on her head and in the facial area and swelling of lower limbs, especially her feet. The same camel had a reddened enlarged blood vessel in her left eye. The only vet document was from a visit from a vet on Dec. 2, 2014 that said the animal was “doing well with nutritional management and was pregnant.”

A camel that had given birth the week before was separated from her calf because of a swollen udder. The camel had not been seen by a vet, but facility staff said they were aware of it and the swelling had gone down since they separated the mother from the calf. A llama had a bluish colored eye and a representative said it was an old injury that had healed, but the inspector found no vet documents. The llama issue was also a repeated non-compliant issue.

• Expired drugs — a bottle of vitamin E, a high level of vitamin B complex, oxytocin, a drug used for anesthesia, a medication used for parasite control and an antibiotic. Inspectors say the drugs may no longer be effective. The medications all expired in 2014.

It’s unclear if the issues raised in the citations and inspections have been addressed. A message left for owner, Henry Hampton, by a Post reporter was not immediately returned.