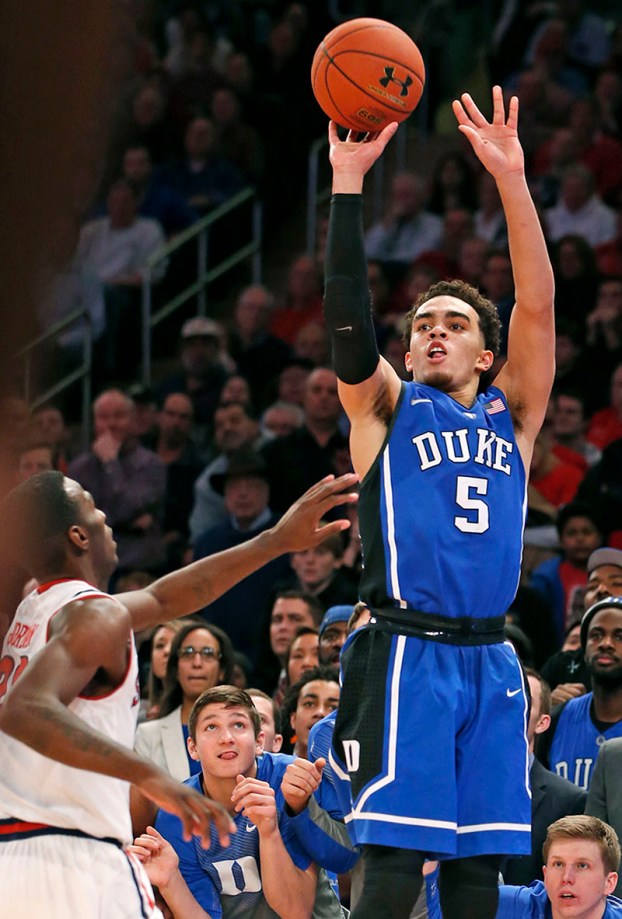 Jones said in a statement issued by the school that he was “faced with the tough decision of returning to a place I love or pursuing the next dream.”

He was selected as the most outstanding player at the Final Four after averaging 13 points and 4.5 assists in six NCAA Tournament games. He led all scorers with 23 in the national championship matchup against Wisconsin.

Krzyzewski said Jones “could not have done a better job for us this past year.”

It’s been a busy week for freshmen heading to the pros: In the past seven days, Jones’ Duke classmates Jahlil Okafor and Justise Winslow declared themselves draft-eligible. Seven Kentucky players also have entered the draft and three of them were freshmen.

None of the departures from Duke was much of a surprise.

Jones is the eighth Duke player to head to the pros after his freshman season and the sixth since 2011 — joining a group that includes Kyrie Irving, Austin Rivers and Jabari Parker in addition to his two teammates.

Among the most prominent freshmen entering the June 25 draft were those trios from Duke and Kentucky — which had freshmen forwards Karl-Anthony Towns and Trey Lyles and backup guard Devin Booker jump to the pros — plus Texas center Myles Turner and Kansas forwards Kelly Oubre and Cliff Alexander.

Childhood friends Jones and Okafor were among the nation’s highest-rated high school players at their positions. They held a nationally televised joint ceremony in November 2013 from their respective schools in Minnesota and Chicago to announced their decisions to play for the Blue Devils.

One of the big questions before this season was how Jones and senior Quinn Cook would coexist in the backcourt.

At no point was that a problem.

Jones became just the second Duke freshman with 400 points and 200 assists, finishing with averages of 11.5 points and 5.7 assists. His assist-to-turnover ratio of 2.86 to 1 was a school record for freshmen.

“He’s going to get a lot better, but people have already seen him and know how he handles himself, especially in pressure situations and in the biggest games,” Krzyzewski said. “He comes through like a champion! I loved coaching him, and I believe he’ll be an outstanding professional. At this time, I think is so appropriate for him to take advantage of this opportunity.”

As officials face second wave of COVID-19, some resisting steps to curb virus