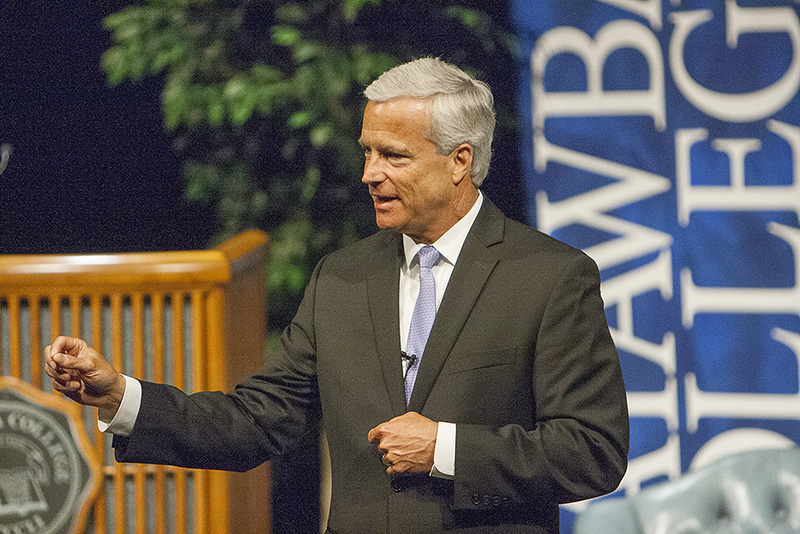 SALISBURY — Those expecting to learn the ins and outs of the Carolina Panthers on Tuesday from team president Danny Morrison were treated to something different.

Morrison told a small crowd in the Hedrick Little Theater for the 12th annual CEO Lecture what he’s learned since graduating from Wofford in 1975 while working with coaches and administrators at all levels.

One of his early mentors was Salisbury coaching legend Pete Stout, who coached at Boyden and Salisbury high schools from 1966 to 1975. Stout won two WNCHSAA championships and 83 games over 10 seasons in Salisbury before returning home to coach at Burlington Williams. That’s where Morrison met Stout.

“What a mentor he was,” said Morrison, who has been an athletic director at Wofford and Texas Christian University as well as the commissioner of the Southern Conference. “He understood the difference between a winning program and a winning team.”

There was something else Stout taught Morrison, and it applied to the Panthers in 2014. Morrison said Stout told him the hardest part of a season is getting to the playoffs because, after that, anything can happen.

The Panthers sat at 3-8-1 with four weeks left in the season. They, however, weren’t out of the playoff picture because the NFC South title was still up for grabs.

“We were struggling in the middle of the year, but the old Pete Stout adage came back,” Morrison said. “Just make the playoffs.”

The Panthers ripped off four straight wins and became the first team to win back-to-back NFC South titles. They defeated the Arizona Cardinals in the NFC Wild Card round before losing to the Seattle Seahawks in the Divisional Round.

Morrison said after the speaking engagement, he was blessed throughout his career to have fabulous bosses. During the program, he spoke of lessons he learned from two of them — Panthers owner Jerry Richardson and Wofford president emeritus Joe Lesesne, who served as the school’s president for 28 years.

“People have to be who they are,” Morrison said to the crowd. “…They care about people.”

He told the crowd about Richardson attending the funeral of a longtime Panthers PSL owner fan who lived in Pinehurst in December 2011 instead of traveling with the team for a road game at Arizona.

“His point was you makes friends through sports,” Morrison said. “If you think about it, what we do is we’re in the building business in sports. We bring families together, and we bring friends together.”

The crowd heard of Richardson chartering a private jet in October 2012 for tight end Greg Olsen and his wife Kara from Charlotte to Boston, and flying with them, while the Olsens sought prenatal treatment for their son T.J.’s underdeveloped heart and aorta. T.J. had four heart procedures, including three open heart surgeries, before his second birthday in October.

It was a lesson in the importance of the personal touch.

Tuesday’s engagement gave Morrison a chance to pass on what he’s learned over a long career. Even though he was the one speaking to the crowd at the Hedrick Little Theater, he gave credit to his teachers.

“The lessons weren’t from me. I don’t have any lessons,” Morrison said. “The lessons I tried to share were from other people like the Pete Stouts and the Jerry Richardsons and the Joe Lesesnes. So it was an opportunity to share some (lessons) of those which I have been blessed to work with.”