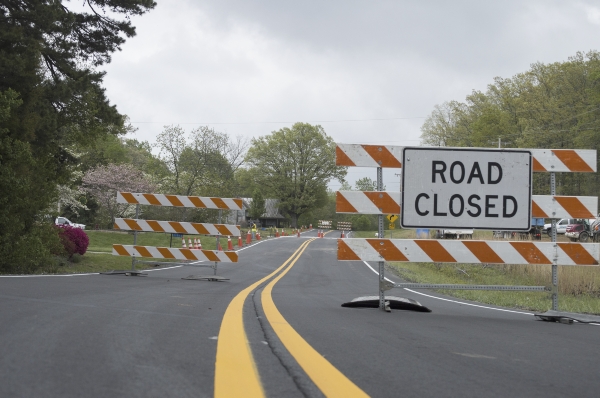 Josh Bergeron / Salisbury Post - A portion of Bringle Ferry Road where a fatal tanker truck spill occurred closed on Tuesday for cleanup work and will remain closed until April 24.

The N.C. Department of Transportation closed a portion of Bringle Ferry Road Tuesday for contractors working at the site of an ethanol tanker truck spill to determine the extent of any contamination.

The closure began at 7 a.m. Tuesday and is scheduled to continue until Friday, April 24 at 5 p.m. The section of closed road is located between Bringle Ferry Road’s intersections with Panther Creek Road and Suratt Road.

Rowan County Emergency Services Chief Frank Thomason said a private company — Hepaco, which has offices in Charlotte and Raleigh — requested a permit from the N.C. Department of Transportation for the road to be be closed for cleanup work. Employees of the company were removing contaminated dirt from areas adjacent to Bringle Ferry Road, which were contaminated by a fatal ethanol tanker truck spill that occurred on April 2. The driver of the truck was killed and thousands of gallons of ethanol spilled onto the roadway.

Ethanol from the spill didn’t contaminate a nearby stream, according to an assessment by the Army Corps of Engineers that occurred on April 10.  Some ethanol did seep into soil adjacent to Bringle Ferry Road, said Cathy Akroyd, a spokeswoman for a division of N.C.’s Department of Environment and Natural Resources. Diesel fuel also leaked from the tanker truck, Akroyd said, but did not migrate from the initial spill site.

Surface water near Bringle Ferry Road was tested on April 7, Akroyd said. The tests results have not been returned yet, she said.

The company contracted to perform cleanup from the spill on Tuesday was excavating dirt near the spill area as a precautionary measure. Akroyd said well water for nearby homes couldn’t be tested until dirt was removed.

Tests on any nearby water wells won’t be conducted until the private company has finished dirt excavation.

Nearby residents were provided with potable water following the spill, Thomason said.