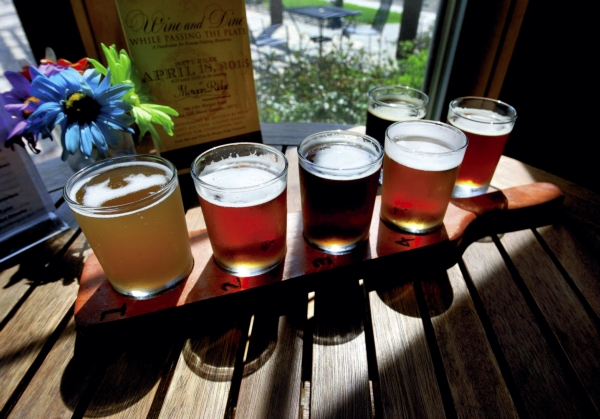 JON C. LAKEY / SALISBURY POST Morgan Ridge Vineyard and Brewhouse has been having success with brewing a selection of craft beers on site. Tommy Baudoin and Vanita Edwards can frequently be found in the small corner of the winery brewing many varieties of beer that are easily compared by consumers in a flight format at the sales counter. A flight consists of several small glasses of varieties of beer for the consumers to sample of taste and other attributes. Thursday, April 9, 2015, in Gold Hill, N.C.

Morgan Ridge Vineyards and Brewhouse, the sign now says on John Morgan Road. Morgan Ridge started making beer about a year and a half ago, starting with small batches to offer at the many weddings that take place at the picturesque vineyard.

It worked so well, owner Tommy Baudoin kept brewing, and his wife, Amy, toured different microbreweries in the state and elsewhere to get a feel for what’s going on in the world of hops and malts.

“Some people come to taste wine, couples, especially, and she wants wine, but he really prefers beer. … We try to keep them both happy.”

Tommy and Vanita Edwards, who have worked at the vineyard since before it opened, were brewing last week in a new system they brought from the Fort Bragg area — three shiny copper tanks, a stainless malt kettle and a chiller.

“One customer, a retired military man,” Tommy explained,  “came in and talked about expanding our brewing.” That man just happened to know where a larger brew system was. Great. But it was in Fort Bragg and hadn’t been used for a while. Amy and Tommy went to see it. It was a four barrel system. It had the fermenter, a tank, everything they needed except the mash turner, which helps to extract the sugars from the boiled grain or malt.

They use step mashing, gradually raising the temperature on the cooking grain mix. Not all systems have the ability to do that. It gives the beer a richer flavor.
New Sarum Brewing Co., in Salisbury, also steps their mash, says brewmaster Andy Maben.
Beer begins with boiling malt — and there’s hundreds of kinds of malt — grains that can have flavors from grassy to honey, then move it through the step process, into the fermenter, where yeast is added to eat up some of the sugars and produce alcohol, and into a chiller, which quickly cools the hot liquid to 68 degrees.
Both Morgan Ridge and New Sarum want to be local brewers and both buy malt from River Bend malting company in Asheville.
Morgan Ridge and New Sarum use locally-grown grains, too. At Morgan Ridge, it’s barley from Hoffner Farms.
Tommy and Vanita are working on a special beer for the upcoming Riot in the Pasture, the major fundraiser for the Bread Riot local foods cooperative.

Both Tommy and Vanita have been to classes and read things online, but “There’s only so much you can learn from someone speaking it,” Vanita says.
“You have to do it, you have to master your system,” says Tommy.
Setting it up and cleaning it takes more time than brewing, both Morgan Ridge and New Sarum agree.
What makes a beer different is the style, with porters darker and more complex and pale ales lighter, more for warm weather.
A day of brewing is 7 a.m.- 4 p.m., and it is 90 percent cleanup.

“You have to take it all apart to clean it,” Tommy says, so you have to put it all back together before you start.
The room they work in smells like grain, almost like cooking oatmeal. They use malts with names like two row, biscuit and honey. The biscuit malt smells like baked bread.
One of the stouts they make uses a chocolate malt and they can add additional cocoa if they want. Add-ins, like chocolate or orange peel, are called adjuncts.
Mashing the malt, or boiling it with water, gets the sugar out of the grains. A mash kettle works much like a coffee percolator, with water washing over the grains again and again to get the most flavor. The beer must be filtered to keep the grain out of what is called the wort, which is what ferments to make beer.
Yeast is added into the fermenter and the mixture bubbles up like dishwashing liquid as CO2 is formed as the yeast eats the sugar — the same action that makes bread rise.
Hops, which are another sort of grain, give beer that distinctive taste. Some people like a hoppy beer, some like less. The hops come in pellet form and they smell like pine or citrus.
At Morgan Ridge, they feel like they’ve perfected the recipe for their Buffalohead IPA, which has 6 percent alcohol and a citrus finish, so they try to make it the same every time.
Beer is more fun, Vanita says, because of all the flavor profiles that can be added. That includes spices like cloves or allspice, or in the case of New Sarum, grits.
Wine making is more standardized, in a way. A cabernet sauvignon has to be made to taste like a cabernet sauvignon, with personal variations to each winemaker, but you don’t usually add vanilla beans or spices to a varietal wine.

The goats at Morgan Ridge are the lucky ones who get to eat the mash of boiled grains. They love it and hang close when they smell the brewing. Some mash goes to grass-fed cows just before they are turned into steaks and roasts.
At New Sarum, the water buffalo and Fading D farms get their mash.
In the summertime, brewing happens three times a week. “With six beers, we’re never sure what people would want,” Vanita says.
Beer keeps if it is cold. “You can’t leave it in the direct sun,” she says. Morgan Ridge keeps their beer in kegs in cold storage. New Sarum has a cold room for fermentation and a cooler for kegs of its beer.
The only way to take Morgan Ridge beer home is in growlers, 64 ounce glass bottles that can be refilled. The same is true of New Sarum, for now. The beer is on tap at Salty Caper, Salty Caper II, Lee Street theatre and La Cava. If you want more than that, Salty Caper and La Cava sell growlers.
The six beers available at Morgan Ridge now are Arrowhead Ale, a light American-style ale; Gold Rush Pale Ale, using caramel malts and mild hop layering; Creek Bottom Brown Ale, a favorite that Tommy and Vanita say they’ve perfected with medium hops and a bold, nutty caramel finish; Buffalohead IPA, with a citrus finish; Pumpkin Ale, an amber ale finished with heirloom pumpkin and spices; and MRV Milk Stout, which is finished with creamy coffee flavors. Vanita says they add lactose to the stout to make it creamy.
To try the beer at Morgan Ridge, you order a flight, a selection of four or all six beers. For all six, the price is $8. For just a pint of beer, it’s $4; half a pint is $2.50; for stouts, the price is $6/pint, $4/half pint. A growler of beer is $20, or $15 refilled; a growler of stout is $27 filled, $22 for a refill.
Tommy and Vanita said they’ve been to other craft breweries. Handcrafted beer is more popular now, and they want to experiment more. They’re seeing people coming from Charlotte, Concord and Winston-Salem and the brewmaster from Foothills Brewing in Winston-Salem came to Morgan Ridge.

Each brewer has secrets they won’t share, and that’s what makes each brew unique. Feedback is welcome.