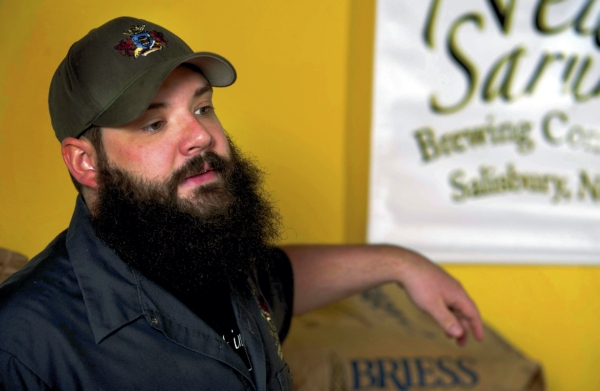 Stopping in at New Sarum Brewing Company, currently on Lee Street next to Salty Caper, there’s a flurry of activity and steam filling the space. Brewmaster Andy Maben and his assistant, Tony Hornick, are busy brewing 142 Blonde Ale with Grits.

With grits? A taste reveals a crisp beer with a corn grits flavor that lingers a bit. It’s not gritty, it just tastes of grits.

With a smaller brewing system, much of the work requires hands-on time repeated through the process. “It’s a lotta hard work, but it’s fun,” Andy says.

Andy, agrees with Tommy Baudoin at Morgan Ridge Vineyard and Brewhouse, brewing is 90 percent cleaning up and about 2-4 percent being artsy with ingredients. “You mop the floor more than you brew,” Andy says.

The goal for New Sarum is to take Old World recipes and ideas into newer technology.

For this brew, it would be easier to add corn, corn syrup or corn starch, but the grits add more flavor. Andy has also prepared a brew using horchata, a popular Mexican drink made from rice.

Andy has to brew as often as possible, starting at 5 in the morning and not finishing until perhaps 7 at night, because of the small production facilities.

New Sarum uses a system sold by a company that specializes in nanobreweries, smaller than a microbrewery, and they don’t have a big mash kettle. They’re basically using a very large stock pot to boil their mash.

In spring and summer, it’s all about sales. People want lighter beers and they’re drinking more.

New Sarum is going to move into the Salisbury Tractor building, which is at the back of the Gateway building, visible from Depot Street. There, they will have a tap room so you can taste and buy beer. Andy is going to see to it that they have too much capacity, so there’s room to grow.

The new brewing system will have some automation so Andy doesn’t have to be boiling mash, hefting the boiling liquid into a container, making sure it gets into the next container and then into a place for fermentation. With new equipment, he can program certain steps, push a button and then go greet visitors in the tap room or small beer garden out front. Sweating from the heat in the brewing room and dusty from opening bags of malt, the idea of some buttons to push sounds pretty good to Andy. The new brewing system will have 30 barrel-capacity, greatly enlarging their output.

Their current spot has a temperature-controlled room that stays at 65 degrees for fermenting. In the room are carboys, 6-gallon glass jugs, with hoses in each running to a central container that looks like its full of bubble bath, but it’s the C02 coming out of the liquid as the yeast eats the sugar from the mash.

To test new recipes, Andy uses a drip coffeemaker, which works sort of like a brewery, to taste different malts.

That’s how he created Galactic Mango, another popular brew, with mango and black pepper adjuncts. It’s very hoppy, Andy says, and has a passion fruit flavor. It is called a Saison style — a pale ale that has fruity or spicy flavors.

In the fermenting room, there’s some High Rock Red Ale bubbling away.

Every yeast works in its own way, too, Andy says. And every brewer does things a little differently.

One thing brewers need to know is math and a little physics, since a beer’s specific gravity determines its alcohol content. Andy, though he studied theater at Catawba College, said he has a head for math and chemistry. He’s a self-taught brewer, as many of the smaller brewers are.

Like Morgan Ridge, New Sarum gets some of its malts from River Bend farms in Asheville, and bags of the stuff are stacked on a pallet in the brewing area.

Adjuncts Andy likes to use include blood orange for a wit (or whit) beer, or lemongrass and orange peel.

Any beer that has a name should be the same, roughly, from time to time. But Andy’s always experimenting, and has four carboys of brews he’s testing in the fermenting room.

He believes North Carolinians want and need indigenous beers that are special to the state. “That’s why we’re investing in the new brewery and tap room.”

The name, New Sarum, is a nod to the past with an eye to the future. Salisbury, England, was known as Old Sarum. This Salisbury is in the New World, so it can be called New Sarum. The logo for the brewery is a combination of the city crests of England’s Salisbury and ours, with the addition of grains growing from the shield.

J. Hurley Wheat Ale, named after the Salisbury Post publisher and philanthropist, is brewed with red and pale malted wheat, aromatic hops and the lemongrass and orange peel, making a refreshing drink for a warm day.

Their spent grain goes to Fading D Farms, where the owners raise water buffalo. Andy and Tony crack the grain themselves, to get the consistency they want. Andy built a roller machine just for the job.

Tony and Andy say IPAs are the entry beers for new beer drinkers, who then learn to taste different brews. They try to be one step ahead in figuring out what people will want. “Then it’s all about marketing,” Andy said.

The new building will include a kegging line, a canning line and tap room. They plan to grow some hops in the beer garden and are very happy they got the project going before the state tax credits for historic building renovations expired.

The building was originally a carriage works and stable, then became the tractor company. It will also have room for a couple of grain silos.

They will not use the full capacity of the building at first, but plan to install enough so there’s room to grow and they hope to grow quickly. Andy said they are also using as many local contractors as they can to get the brewery up and ready to serve.

But now, it’s time to get some more malt cooking. Beer waits for no man.