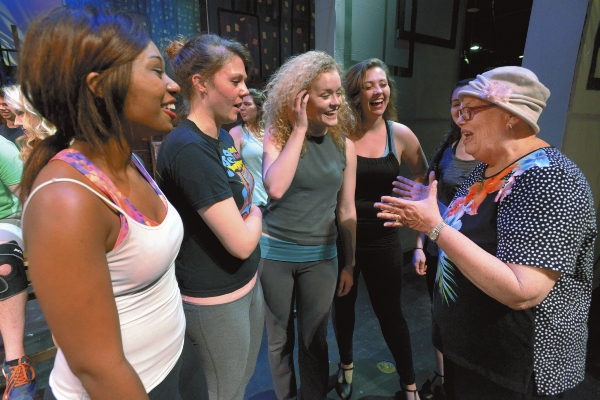 Wayne Hinshaw / for the Salisbury Post Kathy Pulliam, right, talks with Catawba actresses Tabitha Bass, Chelesea Retalic, Prentice Clark, Victoria Whetzel and Laurel Edge (hidden behind Pulliam). All play the role of the ‘Hot Box Girls’ in the production of ‘Guys and Dolls.’ Pulliam was part of the original cast for the Piedmont Players presentation of ‘Guys and Dolls’ in 1979.

SALISBURY — As soon as the Catawba College cast began its run-through of the song “Sit Down, You’re Rockin’ the Boat,” the handful of people at the corner of the stage seemed to be drawn in like moths to a flame.

Who could blame them? This song, this stage, this scenery, this show took them back to 1979 when they were performing “Guys and Dolls” themselves to large audiences in Keppel Auditorium.

When the number had finished, the group from those Piedmont Players days applauded enthusiastically, and after director Joe Hernandez’s introductions, they moved quickly onto the stage to meet the students who had the same roles they did 36 years earlier.

Jake Alexander said hello to Caleb Garner, a student star from Robbins. Both of them know something about playing the role of Nathan Detroit and his floating crap games from the 1920s.

Back in 1979, Patsy Parnell immersed herself in the character of Sarah Brown, the prudish sergeant at the “Save A Soul” mission who becomes the subject of a bet between Nathan Detroit and the equally notorious gambler Sky Masterson.

Close by, Kathy Pulliam was holding court with all the Catawba women who are playing the dolls from the Hot Box. Pulliam thought the girls might get a kick out of seeing an old Post newspaper article about “Guys and Dolls” when she was one of them — a doll at the Hot Box.

It was Pulliam’s idea to bring the “Guys and Dolls” cast and production members from the Piedmont Players days to this practice, just for the reunion aspect if nothing else. She heard early on about Catawba’s plans to do the show because her husband, faculty member husband, David, coordinates the bachelor of science theatre arts degree at the college.

“When I found out last year, I said I really want the cast to get together,” Pulliam said. “It would just be so much fun.”

Ask anyone from the 1979 show, and they will tell you of all the community theater they have done through the years, “Guys and Dolls” was one of their favorite musicals.

For Brincefield, who played Sky Masterson, “Guys and Dolls” was his first big role in a Piedmont Players musical.

“Of course,” Cline said, “nobody has heard from him since.”

The others laughed, because Brincefield has starred in a long, accomplished catalog of shows with Piedmont Players.

Alexander, Cline, Parnell, Pulliam, Harrison, and David and Karen Carmichael said their cast and crew bonded quickly during “Guys and Dolls.” For the Carmichaels, it actually began a long courtship before they married.

“If we weren’t cast in a show, we worked in the show,” Pulliam said of those days in Piedmont Players. “We were always together.”

The after-show or after-rehearsal parties reconvened at places such as Capone’s and Prince of Pizza.

Cline recalled his wife, Julie, was seven months pregnant with their first child at the time.

“So that was probably going through my mind,” he said.

The show depended on a 13-piece orchestra, but it did not have the luxury of on-stage microphones.

For the singing and dialogue, Alexander said, cast members really had to have the pipes in the large auditorium.

“You had to project,” he added.

Rehearsals for this summer musical in 1979 lasted from 7:30 to 10:30 p.m. five days a week. As the show dates got closer, the rehearsals also spilled over into the weekends.

When he looks back, Alexander said, the cast and crew put in a huge amount of work for only a Thursday, Friday and Saturday night show.

The others chuckled when they recalled how Parnell, who is not a drinker, had to act as though she had consumed too much alcohol when singing “If I Were a Bell,” with Brincefield by her side.

“John just had to hold on,” Parnell said.

The big differences between the “Guys and Dolls” cast at Catawba College and the folks who did it back in 1979 are the ages and what the future represented. Most of the 1979 cast and crew were out of college by then, and the immediate future meant simply going back to work the next day and watching their families grow.

Many of these college cast members want to have professional careers in the theater.

Hernandez, faculty professor and director for the Catawba show, was thrilled to have members of the 1979 cast and crew on hand. “Guys and Dolls” hasn’t been done in Keppel Auditorium since then, and Hernandez feels it laid down a special foundation for his students.

“We’re glad to continue with the tradition established in Salisbury so long ago,” he said.

Hernandez said the cast did a lot of table work prior to rehearsals, discussing what was going on in the pre-Depression 1920s and the styles and language being used.

“The kids have really jumped on board,” he said.

As they watched and listened to the Catawba College rehearsal from the back of the auditorium later, the 1979 show members sang quietly along with “Take Back Your Mink,” as though the 36 years had melted away.

Alexander said if you spend weeks doing something with all that intensity and repeating it night after night, it sticks with you.

“You can remember it for a long, long time,” he said.