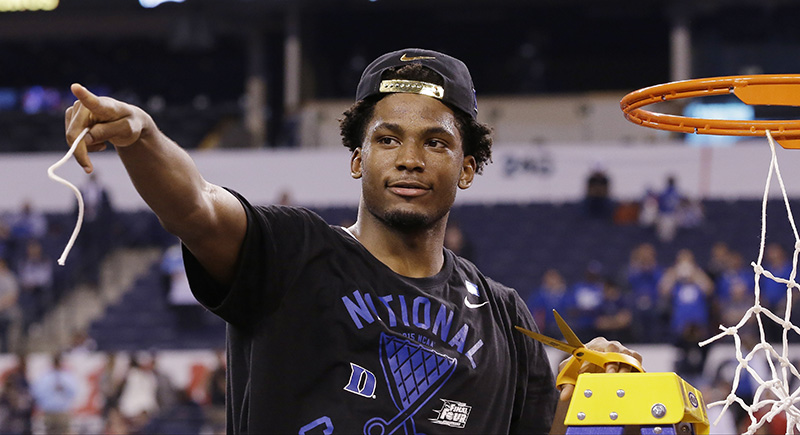 The forward said in a statement issued by the school that “my dreams and aspirations have literally come true” while winning the national title in his only season in college.

He says he believes “it is time to take the next step on my career path and play at the highest level.”

The announcement came less than a week after the same decision from teammate Jahlil Okafor, the first freshman selected as the Atlantic Coast Conference’s player of the year.

And just as Okafor’s was, Winslow’s choice wasn’t much of a surprise.

“He had a sensational year, both on and off the court,” Krzyzewski said. “He was an amazing factor for our success in winning the national championship.

“From everything we have found out, Justise is projected to be a high lottery pick and we believe that to be true. This is a great time to take advantage of this opportunity. We’re behind him all the way and love him and his family.”

He arrived at Duke last summer as one of the nation’s top recruits and ended up ranking third on the team in scoring and second in rebounding.

He started every game and scored in double figures in all but one since Jan. 28.

His move from the wing to power forward allowed the Blue Devils (35-4) to switch to a smaller lineup that wound up being tough to beat. Duke won 18 of its final 19 games.

Winslow averaged 14.0 points and 9.3 rebounds in six NCAA Tournament games, including a 21-point, 10-rebound performance against Utah in a regional semifinal in his hometown, Houston.

He became the seventh player to go one-and-done at Duke, and the fifth since 2011. That club already includes Kyrie Irving, Austin Rivers, Jabari Parker and, of course, Okafor.

Another player — guard Tyus Jones, selected the most outstanding player at the Final Four — could become the third member of that star-packed freshman class to turn pro.

The fourth member of that class — tournament breakout star Grayson Allen — has already said he will be back for his sophomore season.