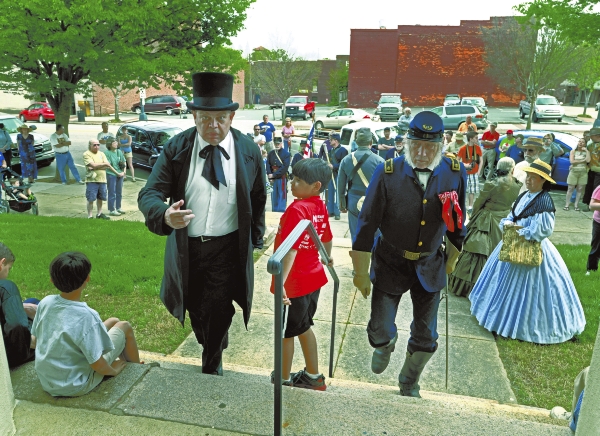 Salisbury mayor (Terry Holt) and Union officer (Luther Sowers) go into the old Courthouse as the Union officer decides if he will burn the building or not at the Stoneman's Raid re-enactment. The little boy in the red shirt was sitting on the steps and got caught up in the action. Wayne Hinshaw/ for the Salisbury Post

Arizona and Addison Day stood outside the Rowan Museum devouring ice cream cones Sunday afternoon as they, along with several dozen other bystanders, stepped back in time 150 years to the day.

Those gathered outside the museum, which used to be the county’s courthouse, were greeted by Rowan Museum board President Terry Holt – or at least an 1865 version of him – in a reenactment marking the 150th anniversary of Stoneman’s Raid in Salisbury.

A century and a half ago, Union Maj. Gen. George Stoneman and his troops descended upon Salisbury, intent on destroying Confederate supplies and its prison – a personal vendetta for Stoneman, who was once a prisoner in a Confederate prison himself.

“He always remembered being a prisoner,” Holt said. “He was doing this raid to try to rebuild his reputation.”

Salisbury had a major stockpile of Confederate supplies because the train tracks’ width changed in Salisbury, making it difficult to move them out to another location.

Because Stoneman cut the telegraph lines, neither he nor Rowan County’s residents realized the Civil War had actually ended several days before when General Robert E. Lee surrendered in Appomatix, Virginia.

Holt, impersonating Salisbury’s mayor at the time, addressed those gathered in front of the former courthouse, telling them what to expect over the next few days as Stoneman and his men occupied Salisbury.

“There doesn’t seem to be a lot of animosity toward us,” he told the women clad in hoopskirts.

“General Stoneman has said he’s on a military mission,” Holt said. “You will see smoke tonight. You will hear explosions tonight.”

Midway through is speech, Union soldiers approached the former courthouse with orders to “torch the building.”

That’s when Holt, much like his predecessors must have done, began to argue on behalf of saving the courthouse.

The building is “simply a depository of our records,” he told the soldiers.

He went on to add that the county’s Masonic Lodge met in the courthouse as well, an appeal to Stoneman himself, who was also a Mason.

After some debate, the soldiers decided to leave the courthouse intact, much to the delight of those gathered – both those in period costume and those who weren’t.

After the re-enactment was over, Holt shared the history of Stoneman’s Raid with curious observers who peppered him with questions.

According to Holt, it’s important for Rowan County’s residents to know how their records, dating back to the colonial era, were saved from destruction.

“We have those records. That’s a rarity,” he said. “This is a red letter day for us for genealogy.”

Folklore suggests that local women were the ones to convince Stoneman’s men not to burn the courthouse, while other stories say local Masons appealed to him as a fellow Mason.

“I think it’s important for them to know about our heritage here,” said the Day brothers’ mother, Tiffany, adding that it’s easy to forget that Rowan County has a vibrant history right here at home.

“We wanted to watch the re-enactment,” she said. “We like learning about the history of the area we live in.”

It took roughly six months to plan the event, Holt said, adding that they wanted the celebration to be a little bit bigger and to include a skirmish between Confederate and Union soldiers.

Most of the Confederate re-enactors are at Appomatix this weekend for the 150th anniversary of Lee’s surrender earlier this week, however, so they weren’t able to get enough actors to participate.