Love offering: Event raises $3,000 for Scott Young, who is awaiting a new heart 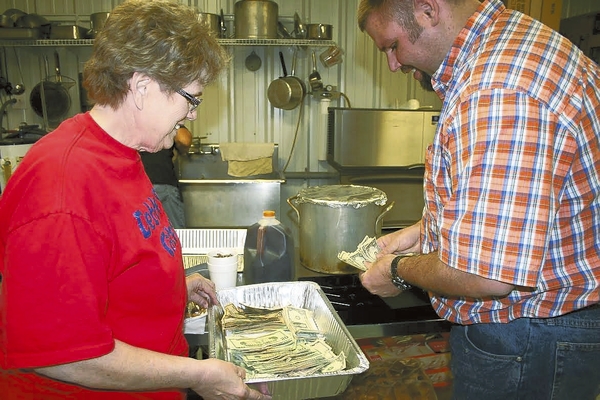 Debbie Suggs and her son-in-law, Garret Frick, count donations from the fundraiser meal for Scott Young at Charity Baptist Tabernacle. The East Rowan congregation raised more than $3,000 with the Sunday dinner. Susan Shinn/For the Salisbury Post

Debbie and her family served up plates full and pots full of love Sunday — cleverly disguised as chicken and dumplings — for a dinner to benefit Scott Young. West Rowan’s longtime football coach is awaiting a new heart, and he and his family — extended family included — are members of Charity Baptist Tabernacle, which hosted the Sunday event.

Scott was unable to attend the meal, but his mom, Betty, was on hand, as well as her three sisters and brother, along with a host of Scott’s cousins and friends.

Members of the congregation had set up seating for 175 in the fellowship hall of the Stokes Ferry Road church, but well over 200 folks were fed, many of whom filled to-go boxes.

“About 19 or 20 people came by and made a donation after church but didn’t eat,” said Garret Frick, Debbie’s son-in-law, who welcomed diners while wife Stacy piled donations of cash and checks in a large foil pan nearby.

Garret said that most of the crowd was made up of church members, but the local community was represented, too. Members loaded a set of long tables with delicious desserts, quite a popular stop during mealtime.

Phyllis Miller helped herself to seconds on chicken and dumplings — most diners did the same — while fixing a to-go plate for husband Hayden. Debbie rounded out the day’s menu with green beans and corn, and red slaw.

“I have come through this with God’s help,” Betty said. “I’m just so overwhelmed how people have shown their love and how this church has opened its doors.”

Scott came home Friday, his mom said, and had hoped to come to the meal.

“I’m closer to Scott than I am to my own family,” Ed said. “I’ve coached with him, and I know what kind of a man he is.”

Ed paused for a long time, and tears welled in his eyes.

“He’s sincere. He’s dedicated to his family, to his job, and to his community — whoever he is working with. He will help anybody in any way possible.”

Jay Wood is a West senior. Scott and his wife bought their house from Wood’s family.

“We’ve been together for a long time,” said Jay, who serves as ball boy coach. “There’s a reason Scott is one of the greatest football coaches in Rowan County. He’s tough, but everybody wants to play with him.”

Debbie’s daughter and son-in-law are members of the congregation, and she wanted to help as soon as she heard about Scott.

“I knew his relatives were here,” she said. “I told Stacy, ‘Call the preacher and let’s do a fundraiser. We put it together in one week. I think we did pretty good to be a country church.”

Chris Roseman and his girlfriend came to eat after attending church at First Baptist. Chris played football for Scott, graduating from West in 2004.

“He was stern, but he was good,” Chris said. “He wanted you to be the best you could. He had a desire to win.”

A few minutes later, he remembered something Scott always told him: There are no excuses in football. Excuses are for losers.

“I remember that every time I make an excuse for something, said Chris, who allowed that sometimes in life, things do happen. “But there are no excuses on the football field.”

The meal was a win-win situation for Theresa Pierce, who taught with Scott’s wife, Diane, at Granite Quarry Elementary School.

“I love Diane, and I love Debbie Suggs,” Theresa said. “She does this kind of thing all the time. She’s like a local philanthropist. Everywhere I go, I see her looking out for people.”

On Sunday, folks looked out for Scott.

He told his mom, “I just can’t believe how good people are.”