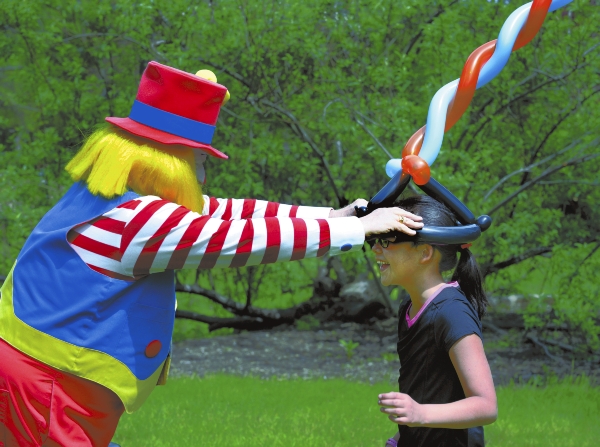 Wacky Doo the Clown made a 'crazy hat' for 10-year-old Jada Rattler at the Hurley Park Spring Celebration. Wayne Hinshaw/For the Salisbury Post

SALISBURY — Hurley Park put on its Sunday best, so to speak, for the 26th annual Spring Fest.

With azaleas and dogwoods in bloom, and the first green leaves of spring opening on the trees, families crowded around the Hurley Park gazebo off Annandale Avenue for live music, art and other activities.

The Salisbury Swing Band played a mix of favorites, from Big Band swing to present-day pop, including a rendition of Pharrell Williams’ hit “Happy” that had the audience clapping along.

It was an event that brought out the kid in a lot of people, regardless of age. Young and young-at-heart stood up to dance on the lawn. Wacky Doo the clown made balloon animals for the kids.

And Cole McDonnell, a student at Salisbury High, was in the crowd juggling beanbags and bowling pins – catching the bean bags on his back, even, to get smiles and laughs from the onlookers.

After graduation, McDonnell said he plans to go to New York and study circus performing.

Being out at Spring Fest, McDonnell said, “just helps to brighten the day, to bring smiles to people’s faces. It captures the energy of the season.”

That’s the reason for the annual outdoor celebration, Beck said – “to get everybody outside, to celebrate springtime.”

And the weather cooperated Sunday, with Beck saying the only complaint was the pollen.

Out on the lawn, Alyssa Smith and Patrick Mitchell found a flat spot of grass to dance along to Glenn Miller’s “In the Mood.”

“I love dancing in the community,” Mitchell said, “I like getting out here. Salisbury’s a really cool community to be a part of.”

Along a nearby pathway, local artists displayed their works.

And Salisbury artist Clyde did a live painting demonstration, creating a field of sunflowers against a backdrop of trees.

“It’s Impressionism,” Clyde told onlookers, describing his thought process. Instead of starting with plans in mind, he said, “I paint what I know, what I think. They’re happenings.”

In addition to longtime residents, the Spring Fest brought out a share of newcomers.

Jason and Diana Keith came out to the park with their daughter, Genevive, to enjoy the weather and the music.

“The weather’s perfect,” Diana Keith said. “It’s a beautiful day, so, why not?”

The afternoon’s festivities included the planting of a new tree in a nearby section of the park, among other ornamental trees.

Mark Martin, of Salisbury Parks and Recreation, said the new Panko cherry tree is one of the ways the city is honoring Arbor Day, which is coming up on April 24.

Salisbury is one of several Tree City USA communities in North Carolina. The Arbor Day Foundation awards that title to cities that meet requirements for protecting and encouraging community forestry.

Martin said the Spring Fest was a great time for the community to celebrate nature.