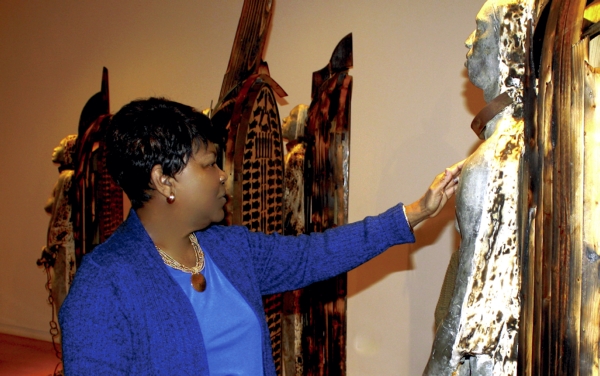 Sharon Barber viewed ‘Cash Crop’ recently at Waterworks Visual Arts Center and was moved to tears by the exhibit, which tells the story of the 15 million who were kidnapped from Africa and forced into slavery. Submitted photo

Sharon Barber doesn’t get out much due to her muscle pain but her life-long friend talked her into seeing The Waterworks Visual Art Center’s exhibition “Cash Crop.” What makes this exhibit so different, she wondered and why was her friend pushing her so hard to see it?

Sharon shares her impressions of the exhibit: “My first reaction at the sight of 15 life-sized men, women and children slaves, chained and shackled, was overwhelming, bringing unexpected tears. The tears of sorrow and despair I felt were like a DNA trigger to remember what my ancestors must have experienced so many generations ago.

“The genius of this artist and his ability to capture the spirit of an era so far removed from his generation is astounding! Each statue I touched seemed to have different expressions. This allowed my imagination to form individual stories. There was a young woman with her head held high; I thought maybe that she was a princess from her tribe. One of the shorter muscular males had a powerful look of defiance while others showed resignation and defeat. However, the young mother with two children, faces streaked with tears, each chained to either side of her was the most striking for me. I imagined from their posture that they were probably obeying their mother’s command to be still to avoid being whipped while she stood feeling despair and helplessness knowing their fate.

“This brilliant young artist, with his passion and insight beyond his years, takes us from the past to the present, with an exhibit on the sufferings of victims of sweatshops whose products from some countries we purchase and enjoy at their expense.”

Waterworks Executive Director Ann Scott Clement explained that the sculptures represent the 15 million human beings kidnapped and transported by sea during the trans-Atlantic slave trade. Additional components of the exhibition include prints, drawings and sculptures that draw further parallels between the economics of the Atlantic slave trade and the Third World sweatshops of today.

Award Winning Artist Stephen J. Hayes invites viewers to walk into an emotional, physical and psychic space to confront the past, present and future. He is currently an instructor at Georgia State University and Rowan-Cabarrus Community College. His “Brookes Slave Ship Plan” image is seen throughout this body of work. The institution of slavery spurred the economy in 1540 with sweatshops. The exhibit stresses the importance of stopping the slavery-sweatshop cycle and how we can all make a difference.