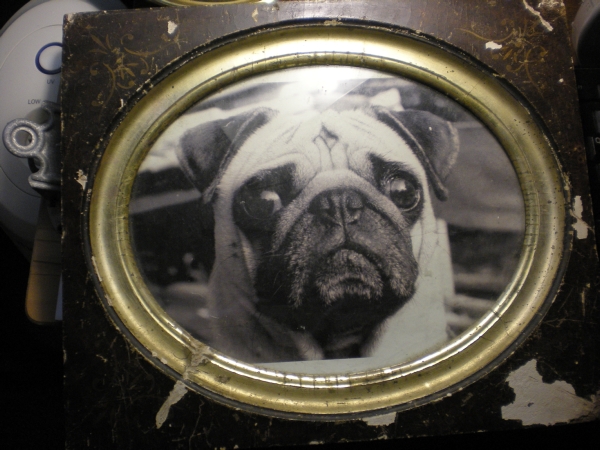 This undated photo provided by John Potter of Lenoir, N.C., shows an oval-window picture frame that Potter says contains a photo of his dog. It looks almost identical to the frame shown in photos Potter took three decades ago that contained an image historians have thought might be the only existing photo of the Confederate ironclad warship CSS Georgia. Potter initially said he photographed the framed image at a yard sale because he couldnt afford to buy it. Now he says the original was a hoax that he created using a model and his brother posing as a Civil War soldier. (AP Photo/John Potter)

The former secretary of state spent nearly two years tiptoeing around a decision that much of the political world assumed was a done deal.

2. WHOSE JOB IS HARDER AFTER NORTH CHARLESTON SHOOTING

Now that one of his white officers is charged with murder of an unarmed black man, the police chief is trying to mend a rift between the force he oversees and the community they serve.

The four men are convicted in the deaths of 14 Iraqis at Nisoor Square in Baghdad, which caused an international uproar.

Children of Holocaust survivors study the history of the horrors their parents endured, in a program that aims to usher in a new stage of commemoration.

5. WHAT IMPOVERISHED TRIBE STRUGGLES TO STOP

A string of suicides by teenagers shakes the Pine Ridge Indian Reservation to its core and sends school and tribal leaders on a mission to prevent the deaths.

“I expect that these graveyards will be expanded as more fighting against Daesh looms in the horizon,” says Ali Abdul-Aali, a Najaf city official, using an Arabic acronym for the group.

Historians had long searched for what seemed to be the only picture of the Confederate ship the CSS Georgia. Now, the man behind that picture tells The AP it is a hoax.

The writer made his literary reputation with “The Tin Drum,” published in 1959. It was followed by “Cat and Mouse” and “Dog Years,” which made up what is called the Danzig Trilogy.

10. JORDAN SPIETH PONDERS WHAT PUSHED HIM TO WIN

“I was already hungry from last year. I had an opportunity and watched it slip away,” says the second-youngest champion in the history of the Masters.

More Check this out

Closings, cancellations and postponements March 19 and beyond

Rowan weather: Umbrellas at the ready