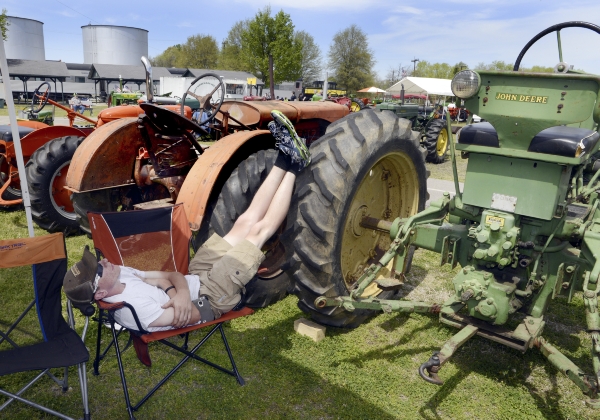 Austin Thies from Mocksville props his legs up for a rest period behind his 1956 John Deere tractor the the NC Transportation Museum Antique Tractor and Train Show. Thies also brought the 1934 AllisChalmers WC and the 1950 Allis Chalmers C tractors to his left. photo by Wayne Hinshaw, for the Salisbury Post

SPENCER — The sounds of American farm life changed after the 1930s, as teams of horses gave way to the gas- and diesel-powered tractor.

Those familiar sounds returned Saturday as the annual Antique Tractor show returned to the grounds of the N.C. Transportation Museum.

Organized by the Iron Peddlers Antique Power Club, the event gave visitors an up-close look at 75 tractors, motors and other pieces of farm hardware.

Other exhibitors brought out their tractor memorabilia, from orange Allis-Chalmers toys and a tractor windmill whose wheels turned with the breeze.

“We’ve got most of your early farm tractors – John Deeres, Fords, McCormick-Deerings,” said Greg Shue, of Iron Peddlers. “We’ve just about got it all here.”

Shue said the show is a way for collectors to honor the American engineering of the past, and also to show off their restored farm equipment.

For collectors like himself, Shue said, the hobby is a labor of love.

“You wouldn’t believe how much time, how many labor hours, go into it,” Shue said.

Among the rarer sights on the yard were a gray-painted U.S. Navy tractor, with a generator on a trailer behind it, and a 1929 Minneapolis tractor, made by the predecessor of the Minneapolis-Moline Co.

Bobby Cartner, of Woodleaf, said he purchased the tractor in 1971, and his grandson restored it in 2014.

“I’ve been into this all my life,” Cartner said as he sat under a canopy next to the antique tractor.

The family cranked up the Minneapolis tractor so passers-by could hear it.

Nearby, Craig Strader explained the regular firing of his 1929 hit-and-miss engine.

The motor could be connected by belt to many different kinds of farm equipment, including saws and water pumps, Strader said.

Asked what he hoped young people would take away from seeing the antique equipment on display, Strader said, “I hope it brings a little bit of humbleness, from where we came from.”

After all, Strader said, the gasoline engines in today’s cars are the descendants of these designs.

Strader’s son, Garrett, 7, went on to win the pedal-powered kiddie tractor pull held on the grounds later that afternoon.

Several young contestants took turns trying to pedal a John Deere green mini-tractor up the sidewalk, pulling a sledge behind them.

All the participants won a small prize, but Garrett was the one who managed to make it all the way up the hill.

Asked if he’d like to try driving a real tractor, Garrett paused a moment, then said, “Maybe when I get a little older.”

Mimu Yager-Yang, age 6, also competed in the kids’ event. She said her favorite real tractor was a pink Ford, restored in non-traditional colors and sporting a pink ribbon with the name “Judy” on the hood.

Yager-Yang, who lives in Winston-Salem, attended with her grandparents, Caroline and Paul Cole of Cambridge, Mass.

Caroline Cole said they heard about the event while traveling, and wanted to have the chance to show their granddaughter the antique equipment.

Arthur Bostick, of Mocksville, came out to the event with fellow members who he said, combined, owned about 40 of the pieces of equipment on display.

Bostick also said the event could be an educational experience for those who came out to the museum.

“I hope that they would see the tractors here, the equipment here, that their father and grandfather had … and just learn a little more about the different types of equipment,” Bostick said.