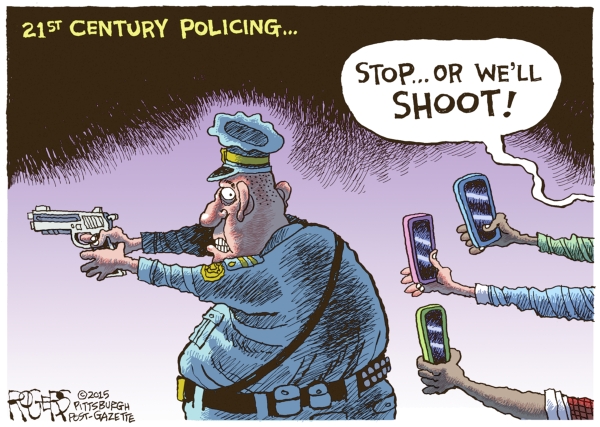 So here we are with another isolated incident.

That, at least, is how the April 4 police killing of 50-year-old Walter Scott will play in those conservative enclaves where the notion that there is such a thing as systemic racism is regarded as deluded and absurd. Those enclaves will not, of course, be able to claim innocence for now-fired North Charleston, S.C., police officer Michael Slager. As cellphone video captured by a passerby makes brutally clear, Slager repeatedly shot the fleeing, unarmed African-American man in the back after a traffic stop.

They will likewise find it difficult to defend a police report that claims officers administered CPR to the dying man. The video shows them doing no such thing. Finally, they will find it problematic to support Slager’s claim that he shot Scott after the suspect seized his Taser. The video shows Slager picking up a small object and dropping it near Scott’s body, fueling strong suspicion that he planted the Taser.

The video, in other words, will make it impossible to deny Slager did wrong. But conservatives will dispute with vehemence the notion that the wrong he did has larger implications.

Indeed, Bill O’Reilly of Fox “News” has already invoked misleading statistics to assure his audience that “there doesn’t seem to be, as some people would have you believe, that police are trying to hunt down young black men and take their lives.”

In other words, move on, nothing to see here.

We ought not be surprised. It is only human that a Bill O’Reilly would want to think of himself and of the culture in which he has flourished as decent and good. To acknowledge that there is bias in that culture is to put oneself into an unenviable moral squeeze: One must either bestir oneself to say or do something about it — or else stop thinking of oneself as decent and good.

It is easier simply to deny the bias, to say that what is, is not. Small wonder that’s the default position of conservatism on matters of race: Absent burning crosses and pointy white hoods, nothing is ever racism to them. And the more fervently one denies self-evident truth, the more emotionally invested one becomes in doing so.

Thus, every incident that illustrates the racism of our system, every statistic that quantifies it, every study that proves it, becomes just another “isolated incident.” There is never an accumulation of evidence pointing toward an irrefutable, irredeemable conclusion. They are a thousand trees, but no forest, a million raindrops, but no storm.

A study co-authored by law professor David Baldus, a 1991 study by the San Jose Mercury News, a 1996 report from the National Criminal Justice Commission, a 2000 study co-sponsored by the Justice Department, a 2004 report by The Miami Herald, a 2010 book by reporter Joseph Collum, all documenting profound and pervasive racial bias in the justice system? Isolated incidents.

Sometimes, you have to wonder at our conservative friends: Where is conscience? Where are intellectual integrity and moral courage? Where is simple, human decency?

Because if you are a decent person, you are up in arms right now. You are demanding solutions — not making excuses.

And if you are not up in arms yet, then pray tell: how many more “isolated incidents” do you need? How much more obvious must this be? How many more bodies will it take?