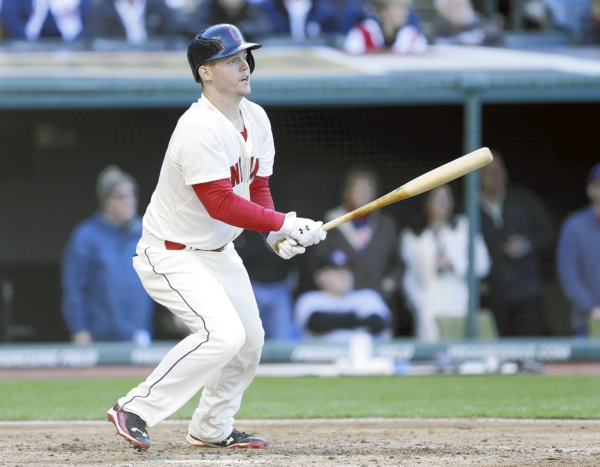 associated press Cleveland Indians' Jerry Sands watches his two-run double off Detroit Tigers starting pitcher David Price in the sixth inning of Saturday’s game in Cleveland. Sands, a former Catawba College star slugger, was just called up from Triple A Columbus on Friday and went 3-for-4 with two doubles and 4 RBI. Sands’ second double tied the game in the eighth inning, but the Tigers had a big ninth-inning rally to win, 9-6.

CLEVELAND (AP) — On a day when Indians fans discovered an unlikely star, one of Cleveland’s most proven players had to be carried off the field.

In an instant, the fun got real serious.

Indians catcher Yan Gomes sprained his right knee while blocking the plate in the ninth inning and Cleveland dropped its second straight at home, 9-6 to the unbeaten Detroit Tigers on Saturday night.

Cleveland manager Terry Francona said Gomes will undergo further tests, including an MRI, on Sunday. Francona did not think Davis made a dirty play.

Gomes blossomed into one of the AL’s best catchers last season, when he batted .278 with 21 homers and 74 RBIs.

Indians reliever Cody Allen (0-1), who gave up Ian Kinsler’s RBI single and a two-run double to Yoenis Cespedes in the ninth, said it was difficult to see Gomes go down.

The Tigers were able to overcome starter David Price’s throwing error, an injury to Victor Martinez and the arrival of Indians outfielder Jerry Sands, who drove in four runs with a pair of two-run, two-out doubles.

Sands is a former slugger for Catawba College, belting 61 homers in three seasons (2006-08).

With the Indians four outs from another loss, Sands, serenaded by Cleveland fans with chants of “Jer-ry, Jer-ry,” delivered his second double to tie it at 5. Sands, recalled from Triple-A Columbus on Friday, gave Cleveland a 3-2 lead in the sixth with a two-run double before the Tigers scored three times in the seventh.

Not long after the Indians fans began chanting his name, the scoreboard in Progressive Field lit up with “JERRY,” a potential future star for the Indians. He received several standing ovations and Cleveland’s dugout erupted after both his big hits.

“That was really something,” Francona said. “I wish we were sitting here on a comeback win, but it still doesn’t diminish what he did. That was pretty neat.”

Sands, who also played for the Dodgers and Tampa Bay, said the chants were nothing new.

“It was fun,” he said. “It started in A-ball actually, and then I got it in Dodger Stadium as well. It gets the fans going, obviously. Sometimes they start the cheering, and not that it’s not warranted, but whether I do something special or not special, regardless they start it. But it’s always fun for them to get into the game and obviously a chant is always fun. “