For Civil War buffs, a rare chance to tour Yadkin battlefield: Tours of Fort York continue today from 2 to 5 p.m. 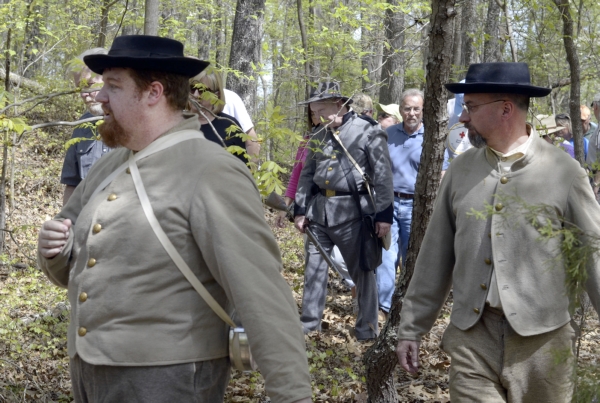 In this file photo, Chris Watford, left, leads a tour of the Fort York site where one of the last Confederate victories of the Civil War was won.

DAVIDSON COUNTY — One hundred and fifty years ago today, the front lines of the Civil War reached Salisbury.

Union troops routed a small defending force at Grant’s Creek, marched into Salisbury and burned the infamous Confederate prison, which had been evacuated weeks before.

But at the end of the day, some six miles away at the Davidson Co. line, the Confederacy’s last important victory was won.

At Fort York on the north bank of the Yadkin, over 1,000 Confederate troops fired muskets and artillery from the high ground to defend a vital railroad trestle.

Today, what were once open hillsides are covered with trees.

About half of the site where the fort stood was destroyed decades ago when the Wil-Cox Bridge was built.

But some of the earthworks and trenches still remain, though difficult to see, among the trees and the scattered remains of a former campground.

This weekend, the LandTrust for Central N.C. is leading tours of the fort – what organizers called “a very rare opportunity” to access the site, which is on private property.

“I like to think of this as a bridge to the future,” said LandTrust Director Jason Walser, pointing out at the site.

Walser said this stretch of the Yadkin has seen the span of U.S. history from Revolutionary War times to the present day – even seeing troops placed there in 1941 to guard the railroad line from possible German saboteurs.

Tours of Fort York continue today from 2 to 5 p.m. at the entrance to the site, located at the ruins of the former York Hill Restaurant on Trading Ford Way.

According to a history of the battle published on Trading-Ford.org, the site has been known as Camp Yadkin, Fort Beauregard and Fort York over the years.

Large Confederate cannons faced northward and across the river.

When some 1,000 Union troops headed by Col. John K. Miller arrived about 2 p.m., the Union scouts were killed. Miller sent word back to Salisbury for artillery, which arrived about an hour later.

According to eyewitness accounts, the heavy artillery fire continued until dark, when Union troops retreated back to Salisbury, destroying the railroad lines as they went.

And so ended what tour leader Chris Watford called “the last significant Confederate victory in the War Between the States.”

Watford was one of three Civil War historians who dressed in reproduction Confederate uniforms for Saturday’s tours.

Lost among the trees, the remaining earthworks are somewhat difficult to see at times.

Watford, Walser and others pointed out the low mounds that mark the inner and outer fortifications – the remains of batteries and breastworks that protected gun crews and infantry who fired muskets.

While several large mortars or cannons faced the Yadkin, other gun emplacements and earthworks faced the opposite side to prevent the fort from being surrounded.

The exact type and number of guns isn’t known, and many details of the site are unclear.

“If someone tells you they know everything about this fort, they don’t,” Watford said.

Jimmy Myers, a District Court judge in Davidson County, came on the tour dressed in the Confederate uniform he purchased in the early ’80s for reenactments.

“I portray my great grandfather, James Myers, who was captured at the Battle of Kelly’s Ford,” Myers said.

“It’s fascinating to see exactly how they were defending the bridge,” Myers said.

Myers also praised the Berry family for helping to protect the site from looters and trespassers.

During the last century and a half, several attempts were made to preserve the site, tour leaders said.

At the same time, Watford said, “water, wind, rain and the N.C. Dept. of Transportation have taken their toll.”

A failed York HIll campground, a theme park and other ventures have been attempted on the site over the years, while the York Hill Restaurant operated just a few yards away for many years.

However, years after first identifying the site for preservation, Walser said the LandTrust plans to exercise an option to buy the site at the end of April.

In the future, he said the LandTrust will consider erecting fences to protect the site from trespassers, who occasionally try to hunt for bullets and shell fragments.

“Our goal is to provide occasional, controlled access to the site,” Walser said.

Doing so will not only preserve the historic York Hill battleground for future generations, but allow more people to experience a place where history has unfolded for centuries.