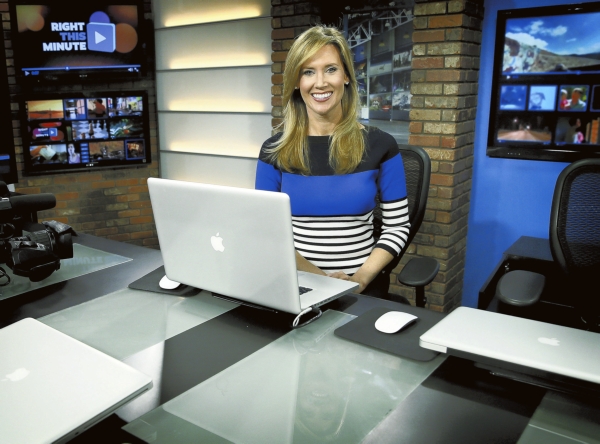 In this March 31, 2015 photo, Beth Troutman is shown on the set of "Right This Minute", in Phoenix. The show gives viewers a daily dose of web videos and the stories behind them. (AP Photo/Matt York)

NEW YORK  — “RightThisMinute” wants to save you time — the minutes and hours you might spend trolling the Internet for interesting new videos in a search you could never hope to get ahead of.

Instead, “RightThisMinute” invites you to tear your eyes from your browser for this syndicated TV show (which, available in more than 90 percent of the United States, airs weekdays in two 30-minute blocks; check local listings).

Its mission: to unearth interesting stuff.

“What we’ve tried to do is bridge the daytime TV audience with the hardcore I’m-on-YouTube-all-the-time world,” says Phil Alvidrez, “RTM” executive in charge of production.

The brisk format is simple: Hosts convene to share with one another (and the audience) videos they like, none of which their fellow panelists have seen until then.

Each of these laptop-equipped curators comes to the table having logged time plundering the Web’s nooks and crannies — their efforts bolstered by a round-the-clock team of e-jays (as in “e-journalists”) — while also digging into details of who made a chosen video and why.

“We found a video where a baby cried when the mother sang to her,” says Alvidrez. “This one beautiful song elicited one particular reaction, and the dad picked up his camera and posted the video for friends. They never intended to be YouTube stars.”

Not only did “RightThisMinute” bring this video to light before it went viral, he says, “but nobody else called the father except us. We like to find out, What were they thinking? Why would they do that? Who are they? Where?

“Even if a video is already well-known, you might learn something about it on our show that you wouldn’t have learned otherwise.”

Quietly tucked away in Phoenix, “RTM” is flourishing in its fourth season, averaging 6.6 million viewers per week and beating such stalwarts as “Dr. Oz” and “Rachael Ray” in household ratings.

“We consider it a reflection of what’s going on in people’s lives: sharing videos,” Alvidrez says, “but we want to get out there ahead of the curve and find the videos that are going to be popular. We’re looking for informative stuff, silly stuff, heartwarming stuff, all of it user-generated.

“When you consider that there’s 100 hours of video being uploaded every minute onto YouTube, it’s a pretty big universe to try to make a splash in,” he adds. “RTM” is seeking splash-worthy videos. (And it welcomes viewers’ video submissions on its website.)

One early discovery: “What Does the Fox Say?” A delightfully wacky music video, it reportedly went on to became the top trending video of 2013 and has now logged a half-billion views.

“Not everything we find blows up big,” says Alvidrez. “But very little that blows up big hasn’t gone through our show first.”

“When I got here, I didn’t know how to find those secret gems,” Troutman confides. “Now, like all the other hosts, I have my tricks and my favorite websites I like to frequent.”

In her own way, Troutman reflects the eclectic group of co-hosts who also include Christian Vera, Gayle Bass, Nick Calderone and Oli Pettigrew.

A political science graduate of the University of North Carolina, Troutman’s resume includes four years in production on NBC’s “The West Wing,” an unsuccessful Congressional run in North Carolina at age 27 (“I had a ‘Mr. Smith Goes to Washington’ thought when I filed,” she says with a wry laugh, “then I got punched in the stomach a couple of times”), and anchor duties on local television and Lifetime’s “The Balancing Act.”

“If opportunities come your way, just say, ‘Yes,’ ” she advises, “then figure out how to make it work.”

Troutman joined the show at its inception in 2011, and ever since, she says, “I come in every day and it’s a day of discovery.”

But not just discovery for her, she points out. For “RightThisMinute” viewers, too.