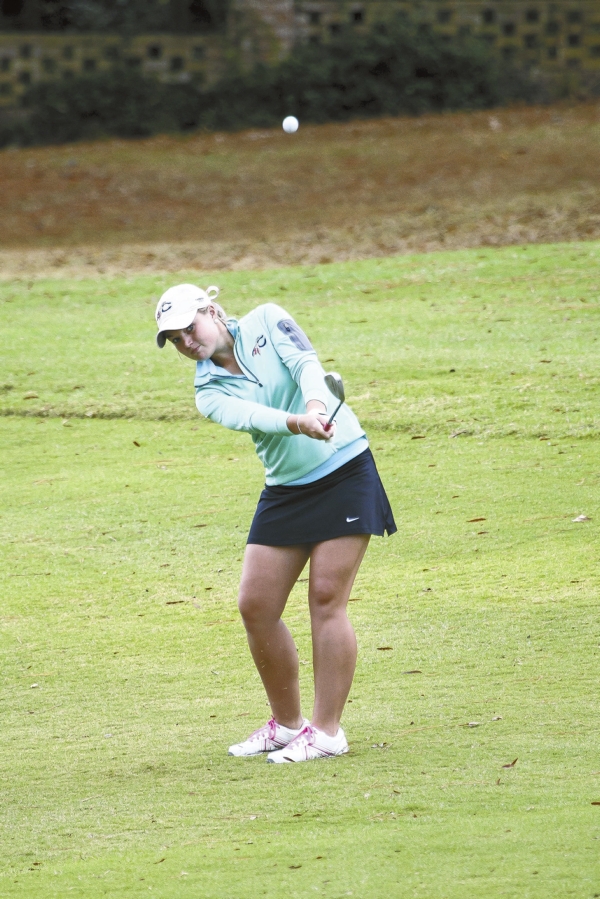 Five Indians will play three rounds Sunday through Tuesday, with the top four scores counting for the team each day. Carson-Newman is the tournament host.

“The four years flew by,”  Kennedy said. “This last tournament is going to be a happy/sad thing. There’s going to be good feelings and bad feelings. I just hope we play well.”

Kennedy was a standout in golf and soccer at Salisbury High. She hasn’t kicked a soccer ball competitively in  years, but she was the Central Carolina Conference Player of the Year in her second sport.

College golf includes fall and spring events. Kennedy shot her best collegiate round last September, a 2-under 69 at the Full Moon BBQ Invitational on a course new to her in Calera, Ala. That equaled the best score ever shot by a Catawba female golfer (Paige Haverty shot a 3-under 69 in 2004). Kennedy’s 69 helped Catawba compile a school-record 300 round as a team.

“I hit greens and I made putts,” Kennedy said. “That 69 came on my 21st birthday, so that was a lot of fun. That was my first tournament with the group of girls we have now.”

Kennedy played on state runner-up teams at Salisbury High. Those would have been 1A-2A state championship teams, but 2A Salisbury was competing in the same division with 3As at that time.

Kennedy made the decision to stay in her hometown and play collegiately for coach Sam Gealy at Catawba. It couldn’t have worked out much better. On the golf course, she’s been a model of consistency and steady improvement.

“She’s been one of the best players we’ve ever had in the program,” Gealy said. “She’s done a great job as far as leadership for a young team this year. She’s been someone for our young players to look up to.”

Kennedy’s stroke average as a freshman was the 11th-best in Catawba history. Her sophomore season was the eighth-best, and her junior season ranks sixth on the program’s all-time list. She’s reduced her stroke average from 80.10 as a freshman to 77.24 as a senior. She’s currently ranked fourth in the SAC.

Kennedy has been Catawba’s No. 1 player for four years. She’s been regognized on All-SAC teams for four years and was first team the last two seasons.

She’s made two holes-in-one as a college competitor and has accomplished just about everything except winning a tournament.

“I was second twice and lost in a playoff once,” Kennedy said.

Off the course, she’s been equally successful. Her GPA as a business administration major is above 3.8. She was the SAC Scholar-Athlete for women’s golf as a junior and was the first in the program to win that award.

Kennedy is pleased with the strides she’s made with her game in college.

“Especially as far as the mental game, I’ve come a long way from freshman to senior year,” Kennedy said. “When I shot the 69  in Alabama, I made a double-bogey on my second hole. But I was able to hold it together.”

“I’ve had some good practices this week, and I think I’ve got it back now,” Kennedy said.

Catawba will head to Sevierville early Saturday and Kennedy and her teammates will play a practice round Saturday afternoon, in preparation for the SAC Championship. Catawba has strong  freshmen this season, including second-team All-SAC player Alexis Kershaw. Early Sunday morning, Kennedy will tee off and get her last happy/sad tournament started.

She has an internship lined up with the American Junior Golf Association, so she may still be involved with golf  in the future.

“I’m not 100 percent sure what’s going to happen,” Kennedy said. “I’d like to go for my master’s degree in accounting at some point.”

But for now, there’s one last tournament to play.