AnnaCraig Boutique brings fashionable finds to Innes Street and beyond 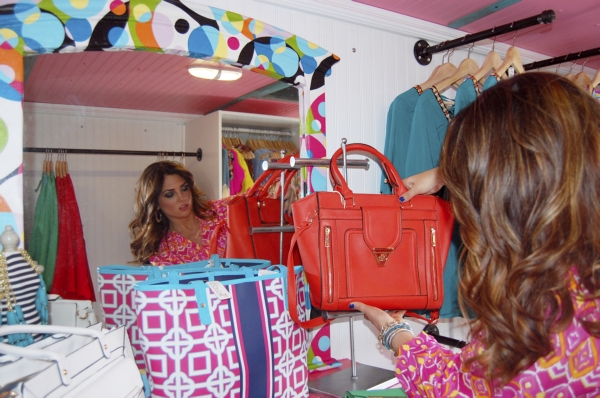 When customers open the door to AnnaCraig Boutique in downtown Salisbury, they’re met with a flood of bright colors and exotic prints.

“I love color, as you can tell,” she laughed, looking around her store.

She said designing the perfect outfit is fun, because she enjoys being able to put different things together, and that she enjoys matching prints that others may not think to put together.

“I wear a lot of different stuff,” she said.

“That’s how we sell it. We wear it,” said manager Bailey Ridenhour.

“Salisbury didn’t really have a store that caters to the younger crowd,” she said.

Most of Myers’ customers are middle and high school aged girls, but often times, she said, their moms get in on the buying action, too.

“I try to get things that cater to a wide variety (of people),” she said. “Whether it’s jewelry or shoes or something else, there’s something for you.”

Myers initially opened a hair salon in the storefront in the heart of downtown Salisbury, and added in a few racks of clothing and accessories as an added bonus.

Pretty soon, however, the clothing business took over the hair business. Myers decided to close the salon and reopen as AnnaCraig Boutique.

Business has grown by leaps and bounds since AnnaCraig opened last June.

“In November, we just took off and never stopped,” Myers said. “I kind of thought the Christmas rush was going to end, but it never did.”

“The only advertising we’ve done is social media,” Myers said, explaining that they keep their Facebook, Instagram and Twitter accounts up to date with the latest arrivals.

“Social media has been a big part of branding,” she said.

“We have tons of people who come in every day who just hand us our phone,” Ridenhour said.

While she does some of her shopping online, most of it is done at markets in New York, Atlanta and Las Vegas.

Different vendors bring their styles to the markets, and Myers orders them there.

“We only get a couple of each size,” she said.

“Our stuff sells out really fast,” she said. “It’s kind of a race.”

Myers said she tries to keep her apparel affordable.

“Most people like to get a complete outfit, I feel like,” Myers said. “They can buy a whole outfit for $60.”

Most styles come in small, medium and large, and some items also come in extra small or extra large.

This spring, Myers will be debuting the AnnaCraig Mobile Boutique, which she said she plans to take the truck to outdoor events and festivals.

The 1988 Chevrolet step van has been up-fitted to be a miniature and transportable version of the store, complete with a dressing room and all the bright and colorful touches found on Innes Street, both inside and out.

Owning a retail store has been a lifelong dream of Myers.

“It’s definitely what I’ve wanted to do,” Myers said.

“We’re both cheerleaders for our job,” Ridenhour said.