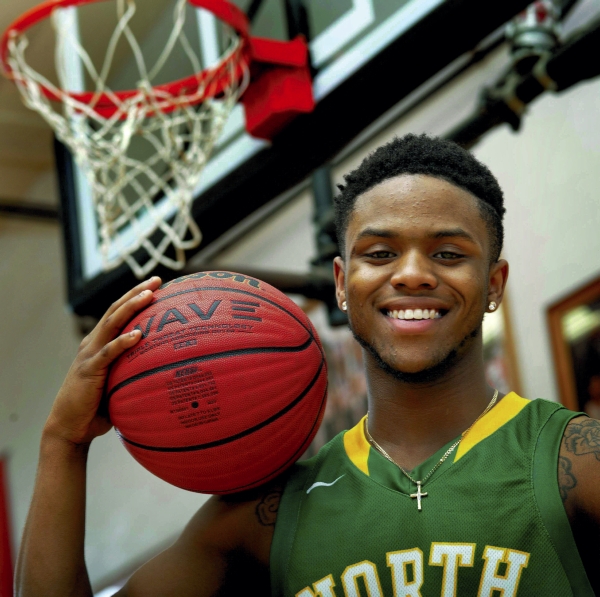 SALISBURY — When the 2014-15 season tipped off, the only starter left from North Rowan’s run to the 2014 2A boys basketball championship game was Jalen Sanders.

It wasn’t his team-high 17.8 points per game the Cavaliers needed most from him, it was his ability to be a leader on the court. His facial expressions on the court don’t give opponents much of a read, but his will to win is unquestioned.

“Jalen’s expression never changes,” head coach Andrew Mitchell said. “You can never really tell what he’s thinking, but one thing we’re sure of, when he hits that floor, there won’t be anyone that outworks him. For him to come in and have the type of season he had, that’s exactly what we needed.”

Sanders, the Rowan County Boys Basketball Player of the Year, needed a little time to get there. As the Cavaliers’ second showdown against Lexington loomed and he drew closer to his 1,000th career point, Sanders said the team chose to talk about the latter. After all, North Rowan beat Lexington once before.

Sanders scored 29 points, a season high, against the Yellow Jackets on Jan. 30 to get over the millennium mark. The Cavaliers, however, lost 66-64. His attempt at a game-winning shot was off the mark. Sanders said Mitchell ran the boys at practice the next day.

It was after the Cavaliers’ second consecutive loss to Lexington three weeks later — this time in a Central Carolinas Conference tournament showdown — Sanders decided it was time to be the leader the Cavaliers needed him to be.

“I felt like I should have been a leader earlier on,” Sanders said. “After so many losses, you just feel like you get tired of it. North Rowan, we don’t lose like this. My first two years, I only lost like eight games in like 40 games. So I had to turn that around pretty quick.”

Mitchell called Sanders an extension of him on the court.

“When you get a guy like that on your team, you feel comfortable,” Mitchell said.

Sanders was the Cavaliers’ engine in the 2A state playoffs. He scored 14 points in a first-round win over Salisbury, a team-high 26 against West Davidson in the second round, and another 18 at Forest Hills in the sectional finals.

The point guard was more than a scorer. Sanders created opportunities for Henderson Lentz and Joseph Scott to step up after Josh Handy went down with a broken wrist.

In the 2A Western Region semifinal against East Lincoln, the eventual state runner-up, in Winston-Salem, with the Cavaliers down, 65-63, in the closing seconds, North Rowan put the ball in Sanders’ hands. His contested baseline shot missed.

The season was over. He walked off the court with his head in his hands and teammate Wesley Jefferies attempting to offer comfort. Sanders said the sequence still eats at him.

It’s just one motivating factor for what he and the Big Green Nation hope will be a run to a 2A state championship in 2015-16. The Cavaliers potentially return four starters — Sanders, Henderson Lentz, Josh Handy and Joseph Scott — from a 19-7 team.

Mitchell said Sanders needs to work on his explosion off the court in preparation for next season.

“Once he hits the floor and goes right back up — dunking off the vertical, dunking with one hand — he’s going to be a special player,” Mitchell said.

That being said, Sanders’ importance will be more than getting points on the board. His most valuable attribute just may be his ability to lead.