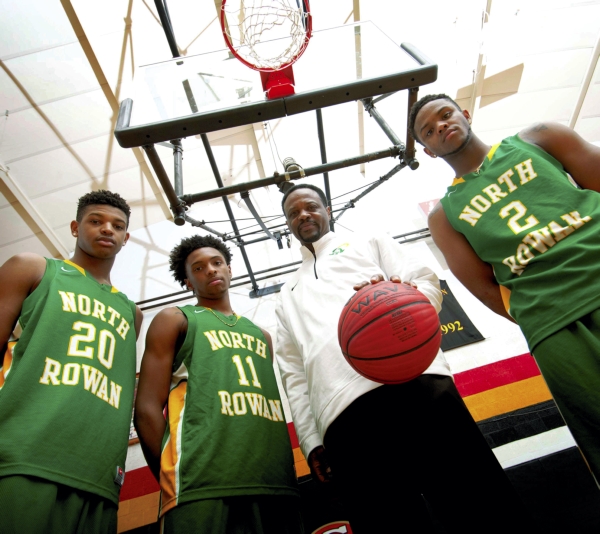 JON C. LAKEY / SALISBURY POST The 2015 All Rowan County for basketball gathered for the end of season photo shoot. The boys coach of the year was North Rowan's Andrew Mitchell who is flanked by Josh Handy (20), Joseph Scott (11) and Jalen Sanders (2). Wednesday, March 25, 2015, in Salisbury, N.C.

SALISBURY — This season was an especially trying one for the North Rowan Cavaliers. They went into the season with high expectations, without being high on experience.

North Rowan returned only one starter from the 2013-14 team that was the 2A state runner-up. Still, the Cavaliers found a way to repeat as co-champions of the Central Carolina Conference — sharing the title with Lexington again — and advance to the 2A Western Regional tournament in Winston-Salem.

“Considering the youth that we had and some of the adversity we went through, I thought it was a great year,” said North Rowan head coach Andrew Mitchell, the Rowan County Boys Basketball Coach of the Year. “I was really proud of our guys and our staff with the way they stuck together and the things they were able to accomplish based on, as I said, the things we had to go through.”

Mitchell said the 2014-15 season was one of the toughest in his career as a coach.

Then there was the Sam Moir Christmas Classic. North Rowan opened the tournament with a 61-57 loss to East Rowan. In the game, Mitchell was ejected after two quick technical fouls following a scrum for a loose ball and verbal exchange with East Rowan head coach Trey Ledbetter. The Cavaliers’ woes continued the next day in a 55-43 loss to Mooresville.

“To lose those first two games the way we did, and again, the Christmas tournament has been our biggest (problem),” Mitchell said. “I never get technical fouls, and I’ve been ejected from two Christmas tournaments. I think that was one thing that set us on the straight path.

“We all decided that no matter what we felt about the officiating or how we felt about other things, we were going to block all that stuff out and focus on good basketball and focus on being a good family. …Everything that happened was a blessing from God because after that we really pulled together and were able to get some things accomplished.”

North Rowan defeated Carson on the final day of the Sam Moir Christmas Classic by 20 points and ripped off nine wins in its next 10 games. Led by Joseph Scott and Jalen Sanders in the playoffs, North Rowan’s average margin of victory in the first three rounds of the state playoffs was 14.3 points.

“Joe is one of our better people on the team,” Mitchell said. “Anything you ask Joe to do, he is going to go 100 percent at it. He comes to practice and works hard every single day. …We weren’t surprised at the things he was able to accomplish.”

The season, however, ended with a heartbreaking loss to East Lincoln, the eventual 2A runner-up, in the Western Regional semifinal in Winston-Salem. The Mustangs were ahead 11-0 after the first four minutes of the game. The Cavaliers fought back in the second quarter, and the game was tied 30-all at halftime.

With East Lincoln ahead 65-63 in the closing seconds, Jalen Sanders missed a game-tying shot on the baseline.

Despite all the hurdles that needed clearing in the season, Mitchell considers 2014-15 a good year.

And the coach and team — with the potential to return four starters — are already talking about next season.