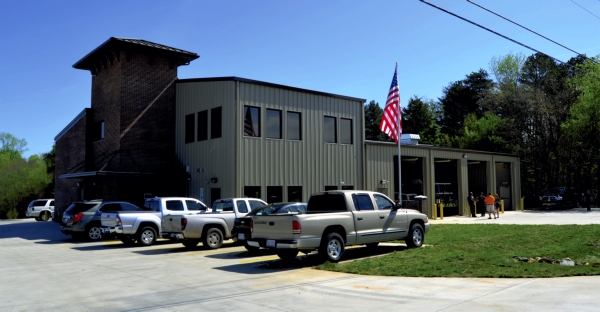 In the early 1970s, J.I. Palmer made a donation of land to the Millers Ferry Fire Department so that it could expand its fire coverage. On Saturday, the community gathered at 4590 Long Ferry Road at the new fire station to see that dream finally come to fruition.

The station was about 45 years in the making said Palmer’s grandson, James Potts.

“I’m almost positive he would’ve been satisfied with a shed with two fire trucks and a great big cow bell out front for you to ring. I’m glad that didn’t happen cause now we’ve got this Donald Trump mansion here,” Potts joked of his grandfather and the station.

He said he lived just a few short miles from the station and was tickled to death that it was built. Also in attendance were two other grandchildren of J.I. Palmer — Sue Palmer Fisher and Mackie Ann Palmer Honeycutt.

The station is the second for Millers Ferry and just 2.5 miles from its first station at 2650 Long Ferry Road. The original station was located at what was Ron’s Body Shop. During those days there was an 8-mile response, said Fire Chief Bobby Fox.

The project started with grading in September 2012, with construction beginning August 2013. The walls were erected around January 21, 2014 following a groundbreaking ceremony later in the month. Wesley Stokes of Speck Builders was the general contractor while Cozart Lumber & Supply provided the building materials.

In order to be compliant with Americans with Disabilities Act (ADA), the two-story station had to include an elevator.

The new station cost $830,000 with money that was built into the budget and re-appropriated after the fire department paid off two fire trucks.

“I think it’s very user friendly and was built economically. It was well overdue and it needed to be here a long time ago,” said Firefighter Chet Hedrick.

Firefighter Ashley Overcash, who will spend her time at the new station, said the station is very beneficial to the community.

When the department began looking at coverage, officials realized some homes were not covered within the Millers Ferry fire district, although they were less than 10 miles from the station. The need for another station also was dictated by the Insurance Service Office (ISO), which provides the minimum level of fire protection and qualifies homeowners to be eligible to receive reduced insurance premium rates.

Overcash spoke of the mutual aid Millers Ferry has with Union, the only closest fire department near the station. Although Millers Ferry receives mutual aid, unlike others throughout the county, it is farther away from the nearest fire station.

The second station just opens the fire district up to more coverage, she said.

“We had to become self-sufficient. We don’t ever want to say we could do that alone because Union Fire Department is extremely helpful,” she said.

Reggie Gobble, who joined with Millers Ferry at age 16 and has been with the station for 53 years, remembers the original station being very small.

“It was tight and we started out with two bays,” he said.

After moving from the original station, station 64 was built and “that was a very nice station and still is, but we were outgrowing station 64 and saw the need for this,” Gobble said.

He said the station was going to be a great asset to the community and the majority of the people he’s encountered are appreciative of the station being there.