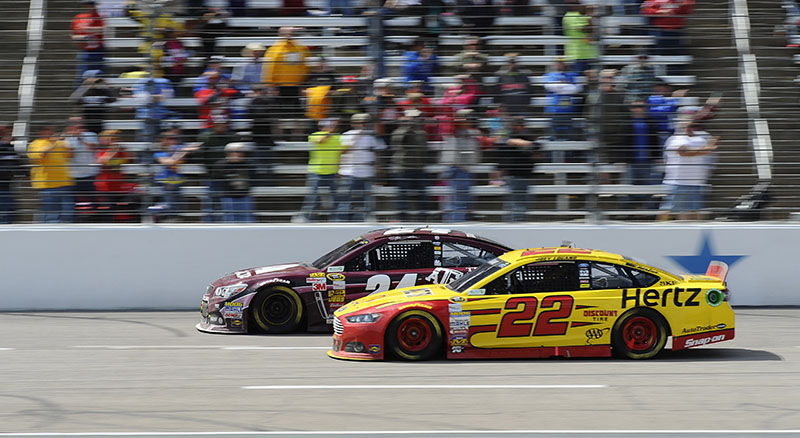 Joey Logano (22) passes Jeff Gordon (24) on the last lap a year ago at Texas Motor Speedway in Fort Worth, Texas. Logano remembers having plenty of No. 24 stuff as a young kid and dreams of racing childhood hero Jeff Gordon to the checkered flag. The racing part was reality a year ago in Texas, with a last-lap pass of Gordon to win.

FORT WORTH, Texas (AP) — Joey Logano had dreams as a kid of racing Jeff Gordon to the checkered flag.

That was reality a year ago at Texas, when Logano made a last-lap pass of Gordon in the NASCAR Sprint Cup race.

“When your 6 years old — I remember that part, and having all of his gear, and all the (No.) 24 stuff,” Logano said. “It’s still cool, you’re racing against your childhood hero, and last year at Texas to be able to pass him for the win like that. That was a really cool moment.”

Logano was leading and about to take the white flag when a late caution came out instead. Gordon exited pit road first after the ensuing stop, but Logano recovered during NASCAR’s version of overtime for the first of five wins in a breakout year.

The Team Penske driver has carried that momentum into this season, starting with a win in the Daytona 500 and finishing in the top 10 in all six Sprint Cup races. Logano is second in points going into Saturday night’s Duck Commander 500 at Texas, after the series was off last weekend for Easter.

Gordon makes the first of his two trips to Texas in his last full-time Cup season, returning to the scene of that post-race melee last November involving Logano’s teammate, Brad Keselowski, and their respective teams. Contact with Keselowski during extra laps ended Gordon’s shot at winning the eighth of 10 races in the Chase for the Sprint Cup — and his fifth season title.

Keselowski qualified third for the first night Cup race of the season, with Kurt Busch the polesitter. Logano will start sixth, and Gordon 12th.

While Gordon and Keselowski may have moved past what happened five months ago, Texas Motor Speedway president Eddie Gossage has certainly had fun with it.

Billboards promoting the race in North Texas showed a puffy-faced Keselowski with the slogan, “Left turns and right crosses!” Others listed “Gordon’s Last Stand!” with a picture of a stern-looking Gordon.

“Got to have fun with this stuff, don’t take it serious,” said Gossage, who saw Gordon about a month after that race.

“He said, I looked over and I saw you, and expletive, of all places for me to do this, why does it got to be here, because I know what you’re going to do,” Gossage recalled. “I said, well, yes.”

During an open test this week at Richmond, Keselowski told NASCAR.com that he’s tried not to feed into that hype.

“I don’t think that’s what racing’s about or what it should be about,” Keselowski said. “But I respect that for Eddie, that sells tickets. He’s got to do what he’s got to do.”

Kyle Larsonis back after missing the race two weeks ago at Martinsville.

“It’s never fun to miss a race, especially when you’re sitting in the hospital,” Larson said. “But it was actually nice in a way too, because I could watch the race from a different perspective, and listen too. I had my NASCAR app up so I could listen to other people’s radio communications and try and learn things that maybe I could do differently to be a better race car driver.”

The Chip Ganassi Racing driver is always anxious to get back to racing after a break, but Larson said he’s not feeling any different than the rest of the Cup drivers.

“Doesn’t even really feel like I’ve been out, it was only one day,” he said. “I was still there for practice and qualifying and all that. Just missed the race.”