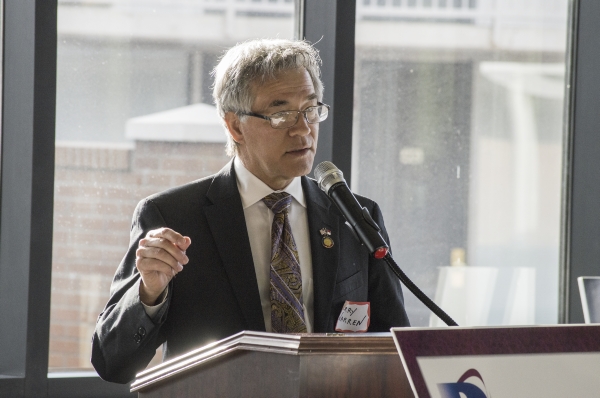 Two members of the Fisher family on Friday cranked up the heat on Rowan County’s state legislators for inaction on reviving the state’s historic tax credit program.

During a legislative breakfast hosted by the Rowan County Chamber of Commerce, Rowan County’s state legislators spent a majority of time talking about taxes and the state’s Medicaid costs. Sen. Tom McInnis, R-25, left for a meeting in Raleigh after an initial speech, which focused on education issues.

When it came time for questions, F&M Bank executive Steve Fisher was first up. Steve Fisher said his question was specifically for Sen. Andrew Brock, R-34.

“As I understand it Senator Brock, the senate has placed the tax credit bill in a committee that its own chairman called a place where bills go to die,” Steve Fisher said. “The statement from the senate, the public statement, is that this is just not a priority for our legislature. It’s confusing for me as a voter for something that had such a mandate at the house level, supported by our governor and supported around the state, is not even going to get a chance to be heard by the senate.”

In his response, Brock said the legislature would be able to lower taxes overall if it focused on taking out credits for corporate and personal income tax. He used the solar industry as an example, saying it would cost taxpayers money because tax credits would help subsidize the industry.

“We are going to give cities and towns the full opportunity to do it themselves, and it would be upon them to give those types of credits and allow those things to happen,” Brock said.  “What we have to do is make choices and decide what we can do on a state level with the corporate income tax and personal income tax. That’s why the senate has to give full flexibility to cities and towns to run their own historic tax credit program.”

Immediately after Brock finished his answer, Paul Fisher, chairman of the F&M Bank board, stood up to state potential effects on rural North Carolina if credits aren’t reinstated.

“Most counties are not that prosperous,” Paul Fisher said. “The county seat in these counties is the train that drives the economy for that county. If the buildings that are falling down in these small towns cannot be revived, young people will not stay home. They will leave, and rural North Carolina will continue to disappear.”

He cited several examples of cities, including Albemarle, Lexington, Salisbury and Mocksville as examples.

“Young people are not going to stay in their hometown when it does not look prosperous,” Paul Fisher said. “If the legislature does not approve this, then it tells me that they do not understand rural counties and rural communities.”

The most significant difference of opinion between legislators is whether cities should shoulder the burden of providing incentives for historic preservation projects. Some legislators believe the projects should operate in a similar manner as the historic tax credits that expired in 2014, but at a lower level. Rep. Harry Warren, R-77, was the only other legislator to talk about the historic tax credits. Warren addressed the credits in a five-minute speech before the question and answer period and later, during an unrelated question.

Warren has drafted a compromise bill that could bridge the gap between the state House and Senate. It is based on the original tax credit program, but makes changes to include a contribution from cities. Warren said he talked with Cultural Resources Secretary Susan Kluttz about his bill. Warren said Kluttz was committed to reinstating the historic tax credit program as proposed in the House. He compared it to the commitment of the Senate to reinstating the historic tax credit program with the responsibility shifted to municipalities. As a result, Warren said he no longer plans to introduce his compromise bill.

“When you look at programs like the historic tax credit, I think that’s one area where we’re investing in a long-term return,” Warren said. “I just ask that you be patient with us. If you have an opinion or question, contact us and we’ll be glad to get back with you. It’s not as simple as fixing the program because, if you fix this program, it affects that program. We’re all trying very hard to get it right.”