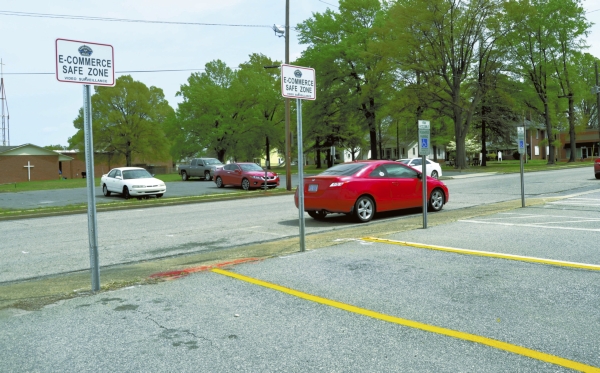 KANNAPOLIS — Vicki Graham read about the police department in her hometown of Gainesville, Ga., providing a safe place for online buyers and sellers to trade goods. She thought it was such a great idea she figured she’d pass it on to the Kannapolis Police Department.

Graham, a Kannapolis resident, said her sister, who still lives in Gainesville, posted on Facebook about the e-commerce safe zone, and the idea stuck with her.

The police department would designate a spot near the station where people who make online purchases on sites like Craigslist, eBay or Backpage could make transactions and exchange merchandise in a safe way.

She hadn’t heard of it being done in her area and thought “it was an easy thing to do.”

“He said they wanted to do it,” Graham said.

“I’m thrilled they were so supportive,” she said.

Graham gives all credit to the Kannapolis Police Department for taking her idea and bringing it to fruition.

“They’ve done so many things in the community. They seem very involved with people,” she said.

Graham contacted the department March 18, and by April 8 the implementation of the safe zone and signs were in place. The signs are located in the Police Department parking lot at 314 S. Main St., in two designated spaces marked “E-Commerce Safe Zone.” The signs note the area is under video surveillance.

Kannapolis Police Chief Woody Chavis said buying and trading of items and products online has increased dramatically over the past several years. Some of those transactions have been scams, robberies or worse, he said.

“Anytime you can be proactive and prevent possible crimes, it is a good thing to do. We always want to be proactive,” Chavis said.

Chavis noted that once the department moves into its new building early next year at 401 Laureate Way, it will issue notice of the new safe zone location.

Chavis said Kannapolis Police have investigated a lot of scams through phone and internet, but have not had issues at exchanges.

“We just want to prevent any potential incidents that may occur and give the people a safe place to do it,” he said.

Chavis said he believes the Kannapolis Police Department is the only agency in the area providing this service, although it has been done in other states.