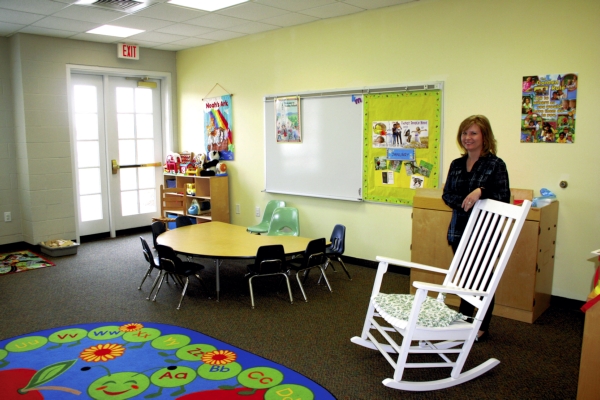 Volunteer Angie Tyler has been busy getting classrooms organized at Blackwelder Park Baptist Church’s Kingdom Kids preschool, which is set to re-open in August. Susan Shinn, for the Salisbury Post.

KANNAPOLIS — Blackwelder Park Baptist Church will reopen its preschool this fall, in time for the 2015-16 school year.

The preschool was one of four areas of concentration the Rev. Phil Goble prayed about when he became the church’s senior pastor in October. The first was youth, and the church has hired Josh Welch to serve as minister for music and youth; the second was to strengthen its outreach programs, which is happening; and the third was the reopen the church’s food pantry, which has also come to fruition.

Angie Tyler, a longtime church member, is helping get the preschool open again. The church approved the plan at a recent monthly congregational business meeting, with 100 percent support. Angie has been busy setting up classrooms and inventorying the equipment that’s already in place. She plans to freshen up the rooms with a new paint color scheme, but most of the furnishings and materials are already in place.

The preschool will offer classes for children ages 2, 3 and 4, with one teacher and one assistant in each room. Kingdom Kids at Blackwelder Park will be a half-day program, open from 9 a.m. to 1 p.m. and following the Rowan-Salisbury School System calendar. The 2’s will meet Monday-Tuesday, the 3’s will meet Monday-Wednesday, and the 4’s will meet Monday-Thursday.

The preschool will use the Wee Learn curriculum, and Angie is also researching other curriculums as well.

When Angie had her second son, now 11, she quit her job to stay home. Two months later, she realized it was not for her.

“I was looking for a job,” she says, “but I had never considered working for a preschool.”

She went to work at First Baptist Church’s preschool, and found the arrangement ideal.

She later worked for a year at the Blackwelder Park preschool.

The Blackwelder Park preschool will be a safe environment, Goble says. “Parents can drop off their kids here, and we’ll care for their kids like they’re our kids.”

Goble says it’s been a joy to watch the congregation spread its wings again. “They’ve been following God’s will. To get to this point and commit to reopening the preschool is amazing. You don’t just build a building and then quit. Part of the ministry of this church is outreach to families in this area.”

“This is a nice facility for the children,” Angie says of the preschool building, which was built in 2006. “I was gung-ho and excited about this program form the start. It’s just a wonderful ministry.”

Angie has seen the impact that preschool had on her younger son.

“It was a good experience,” she says. “He was very ready for kindergarten.”

Goble hopes to hire a director within the next month, and hire teachers this summer.

“It’s really made an impact on this church,” Goble says of the preschool’s reopening. “Everybody’s just been so excited.”

“They’re ready for life to be back in that building,” Angie says.

For more information about the Blackwelder Park Kingdom Kids preschool, call the church at 704-932-4266.