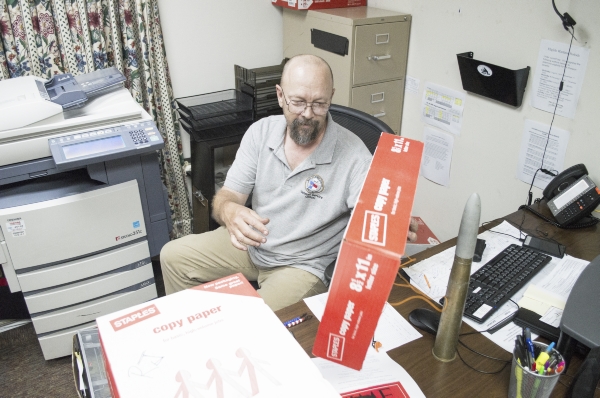 Josh Bergeron / Salisbury Post - Veteran Service officer Rick Johnson packs up his office materials Thursday in preparation for his department to move to a county-owned building on Old Concord Road.

The Rowan County Veteran Services Office is finally getting the space it has needed.

Starting Tuesday, the agency will operate out of the county’s building at 2727 Old Concord Road — commonly called the Cooperative Extension Building. It’s coming from a one-office space in the Rufty-Holmes Senior Center.

The current facility used by the Veteran Services Office measures 262 square feet in size, posing problems for privacy during client interaction. The five-office space in the Old Concord Road building that will be used by Veteran Services is over 1,500 square feet.

The temporary space is slightly less than the requested amount of space in the county’s space needs plan, released in March. The space needs study states Veteran Services needs 1,611 square feet in space.

Veteran Services Officer Rick Johnson said topics of conversation during appointments with veterans often can’t legally be discussed with other people in the room. The two desks in the current office space don’t allow for such privacy, he said.

Another difference between the two facilities is that the Old Concord Road facility isn’t located on a bus route, whereas the Rufty-Holmes Senior Center is on a bus route.

Price said it’s possible Veteran Services could add a receptionist position to help with the office’s operations in the larger space on Old Concord Road.

Packing to move into the new facility began Thursday and will continue Friday. Johnson said the office would be open for emergencies on Friday, but no appointments are scheduled.

The Veteran Services Office will resume its normal operating hours of 8 a.m. to 5 p.m. on Tuesday.

The temporary solution for county office space was developed by county manager Aaron Church in mid-February after commissioners canceled all contracts at the former mall, renamed West End Plaza after the county bought it. It was crafted based on speed of implementation and low cost, as the Veteran Services Office move won’t cost any additional money in rent.

Both the Veteran Services Office and the Board of Elections are part of the temporary plan and have proposed space at West End Plaza.

The solution for the Board of Elections was to use a second floor conference room in the county’s administrative building for storage.