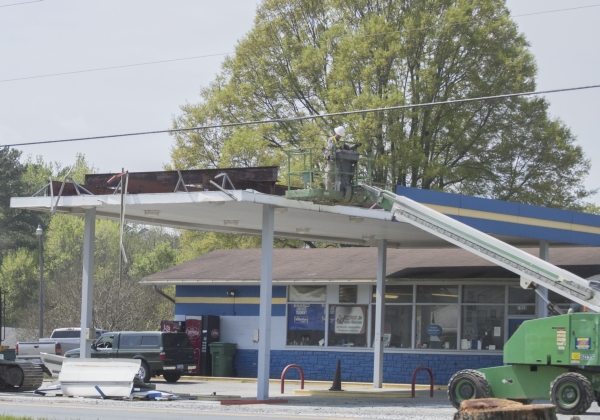 Josh Bergeron / Salisbury Post - A Double D Construction employee uses a lift to reach the top of a canopy at Sifford's Service station that was torn down on Thursday.

A state Department of Transportation project near Rockwell will eventually lead to the closure of Sifford’s Service station, according to the business’ owner.

Construction crews tore down the canopy of Sifford’s Service station on Thursday, to proceed with a project that’s expected to improve safety at the intersection of U.S. 52 and three other roads — Anthony, Crescent and Gold Knob.  The service station has been owned by multiple generations of the Sifford family. Derek Sifford, the current owner, is the latest. His primary concern with the project deals with land acquisition. Sifford said he’s unhappy with the value placed on his property and the fact that the state forcibly took his land.

“I’ve been here 40 years, paying my taxes and doing what I was told to do by the government, and then this,” Sifford said. “I’ve drawn zero money in my life from unemployment. I’ve never been unemployed.”

After Sifford tried to get a higher value for his land, the state condemned it after a lawsuit was filed in court. He received a check from the state for over $200,000 — a price that’s similar to the money shelled out for a smaller piece of adjacent property that was also torn down as a part of the state’s plan to improve safety in the area.

In 2012, the state announced it would turn Gold Knob Road into a dead end and realign Anthony and Crescent roads. At the time, Division 9 engineer Pat Ivey said the reasoning for the change was safety. The state Department of Transportation’s statistics show 17 crashes and one fatality at the intersection adjacent to Sifford’s Service station from 2008 to 2010.

Sifford was working on a car Thursday when construction crews from a company contracted by the Department of Transportation began tearing down his building’s canopy. By 5 p.m., the canopy was demolished and crews were cleaning up any remaining debris. Sifford was still inside, working on vehicles.

Sifford said he was first told the canopy of his building would be torn down at about noon on Wednesday.

Contractors for the Department of Transportation said they only would tear down the canopy and not Sifford’s building. Even though the main building won’t be demolished, it won’t be possible to operate his business, Sifford said.

Sifford plans to continue working on cars at his current location for as long as possible. However, Sifford said at some point he’ll have to shutter his service station because of the road construction. The road work will mean he can’t put water or septic tanks on the property, Sifford said. As a result, it doesn’t have much resale value, he said.

“It’s no good,” he said. “It’s not sellable. What? Am I going to get $200 per month for someone to store their boat that has the money, but doesn’t have the space?”

However, the project has already affected business, Sifford said, despite the fact that roadwork hasn’t started.

When the project was announced, Sifford was in the middle of negotiations to secure a two-year contract with a gasoline supplier, he said. Department of Transportation employees, Sifford said, stated the land acquisition would be complete before the contract reached the two-year mark. He would have been able to sell gas 24 hours per day with fuel pumps that accepted credit cards, Sifford said.