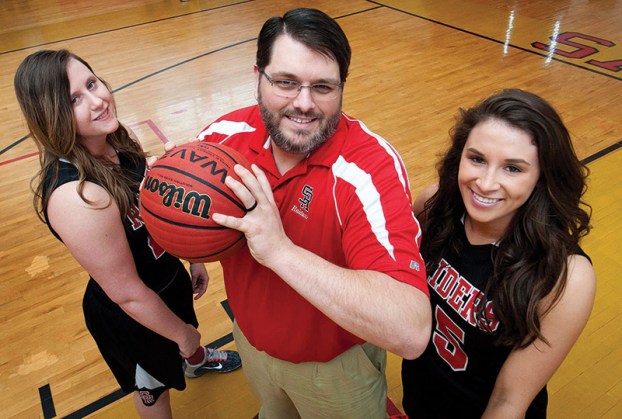 SALISBURY — When South Rowan girls basketball coach Jarrod Smith watched his current senior class play as seventh graders, he knew they had a chance to be champions.

The road wound longer and was bumpier than Smith planned, but the class of 2015 gave Smith and their school that cherished championship, taking the South Piedmont Conference title for the school’s first basketball banner (boys or girls) since 1999.

South Rowan went 18-7 overall and 14-2 in the SPC. Smith is the Rowan County Girls Basketball Coach of the Year for directing that effort.

“It was a long process,” Smith said. “Two years ago, we only won six. This year we only lost seven. Credit the girls. I didn’t do anything different than I’ve ever done, so it was them. We had exceptional players in Avery Locklear, Cassidy Chipman and Sylvetta Bost to lead the way, and others came through. They were seniors. They stepped up when it was their turn.”

A product of Wilkes Central High and Appalachian State, Smith coached South Rowan’s jayvee girls for four seasons before being elevated to varsity coach as a 29-year-old prior to the 2009-10 season.

Success didn’t arrive overnight. Smith was 30-65 in his first four seasons, but last season the Raiders went 18-10 and finished second in the SPC behind East Rowan with a team of juniors.

This season had a now-or-never feel to it from the start. As seniors, the Raiders delivered.

“Coach Smith’s expectations for us were high, and he always believed in us,” Locklear said. “He knew what we could accomplish, and he got us there. He wasn’t a screamer.  It was always, ‘Now if we do this, this and this, we’ll be fine. Go get three stops and go score three times, and we’re right back in the game.'”

South Rowan was in danger of falling short of its goals when it lost 58-54 at East Rowan in early January to fall to 9-5 overall and 6-2 in the league.

“That game was disappointing and we had to look in the mirror a little bit and fix some things,” Smith said. “But as upset as everyone was, the bottom line is we’d lost by four points on the road to a very good team. We were a good team too, and I told the girls they could win out. I knew they could win their last eight conference games, and if they did, they’d be champions.”

The first six of those eight came with relative ease.

The last two were mind-boggling and came against the other two contenders. Locklear scored 37 points, and Chipman was huge in overtime in a 69-67 double-OT victory at Hickory Ridge. South Rowan rallied from eight points down to avenge a December loss to the Ragin’ Bulls.

That victory set the stage for a winner-take-all game with East Rowan on South Rowan’s Senior Night. The Mustangs controlled Locklear and Chipman, but Bost and Kayla McClendon sparked the Raiders to a 55-50 victory in a packed gym.

“We caught our stride in January,” Smith said. “Then those last two games, it all came together.”

Smith has always made the program about the girls, not himself. That didn’t change with the success of the last two seasons.

“He was a great guy, someone you could talk to,” Locklear said. “With all the ups and downs, he was always there for us.”

From staff and wire reports Salisbury’s soccer team won 2-0 at Central Cabarrus on Thursday. The Hornets (9-1) got their... read more