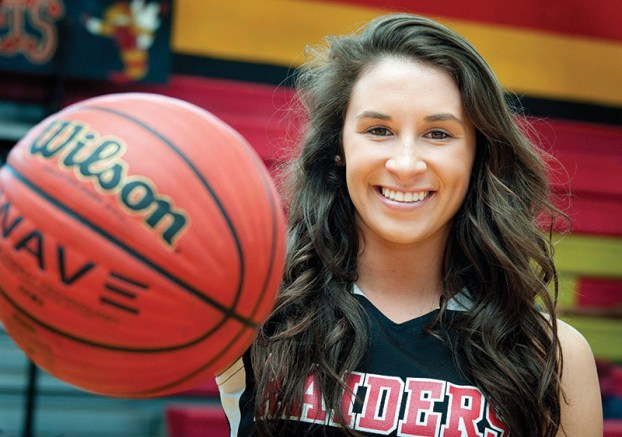 SALISBURY — There’s a lot more to Rowan County Player of the Year Avery Locklear than points, but points are where you have to start because she scored an extraordinary amount of them.

“Defenses played me to drive, but I’d really worked on my outside shot,” she said. “I had a lot more confidence in my 3-point shot as a senior.”

Locklear, who repeated as the Rowan County Girls Basketball Player of the Year, shot surprisingly sweet percentages as a senior.  She made 52 percent of her shots from the field and 44 percent from beyond the 3-point line. She was on target 72 percent of the time from the free-throw line, but she was disappointed with that. She believes she should make them all when no one’s guarding her.

The cancellation of the South Piedmont Conference Tournament because of weather woes cost Locklear her first 500-point season, but she still scored 495, the fourth straight season she’s topped 400.

Locklear accounted for four of the top 15 individual scoring seasons in program history. That’s at a school that opened in 1961.

Her 1,795 points are the most anyone has scored at South Rowan in girls or boys basketball. Even missing a half-dozen games her junior season with a hand injury, Locklear shattered the school scoring record of 1,529 that had been held since 1997 by Jill Cress.

Locklear ranks seventh in Rowan County girls scoring in the last 50 years, a period that takes in a lot of great players.

At 5-foot-7, and that might be stretching it, Locklear was never the tallest nor the quickest. But she was the most determined, the most aggressive and the most resourceful. She was tough, physically and mentally.

Her senior season was her best, and that’s saying something because she also was the county player of the year as a junior. She’s the first to win back-to-back awards since Salisbury phenom Shayla Fields won three straight from 2003-05.

“There was a lot less pressure this year,” Locklear said. “Signing with UNC Pembroke before the season made a big difference. It really helped me relax.”

Her individual accomplishments were enhanced by South Rowan winning the SPC championship, the school’s first basketball banner since 1999.

Locklear scored in double figures in 23 of South Rowan’s 25 games, had a 30-point effort against Carson, a 37-point game at Hickory Ridge, and a 29-point outing in the Raiders’ close second-round playoff loss at Crest.

She was solid across the board for the Raiders, usually adding seven rebounds, three assists and three steals to her efficient 20 points per game.

Locklear can’t pick just one season highlight, but she can narrow it down to two. The double-overtime win at Hickory Ridge that gave the Raiders a chance to be champions and the Senior Night victory against East Rowan that earned a place in school history.

“The support we had from our students and fans on Senior Night was amazing,” Locklear said. “That’s the most people I’ve ever seen in our gym.”

The fans will keep coming, but it may be a while before they see another Locklear.

SALISBURY — When East Rowan and Salisbury met Friday on the hard court, it was a big match for both... read more