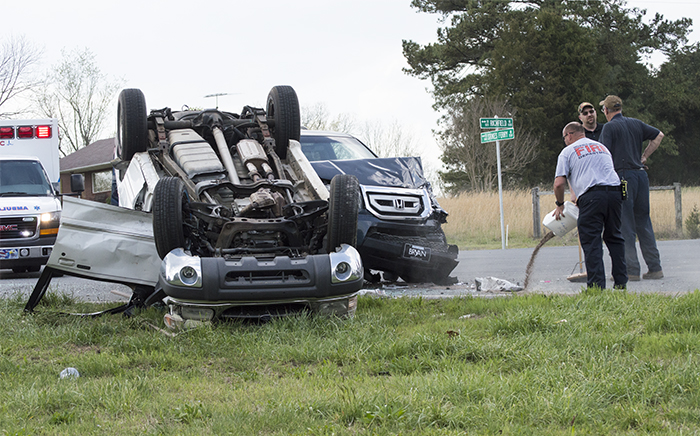 Josh Bergeron / Salisbury Post - Emergency crews clean up debris from an accident that happened at the intersection of Stokes Ferry Road and Richfield Road.

Six people were hospitalized, including four children, when two cars collided at the intersection of Stokes Ferry Road and Richfield Road this afternoon.

None were seriously injured, a crash investigator said.

The accident occurred when a white SUV carrying two people struck a blue SUV carrying a mother and four children. The passenger in the white SUV was not hospitalized, said N.C. State Trooper R. Charubini.

Ambulances took all six who were hospitalized to Stanly Regional Medical Center. Charubini described the injuries as “cuts and scrapes.” The driver of the white SUV wasn’t wearing a seatbelt, Charubini said.

The white SUV was traveling north on Richfield Road and the blue vehicle was traveling south on Stokes Ferry Road when the two collided, Charubini said.

The white vehicle flipped over into a grassy lot adjacent to the intersection, located in the southeastern corner of Rowan County. The blue vehicle was heavily damaged on its front left side.

The driver of the white SUV was temporarily trapped inside.