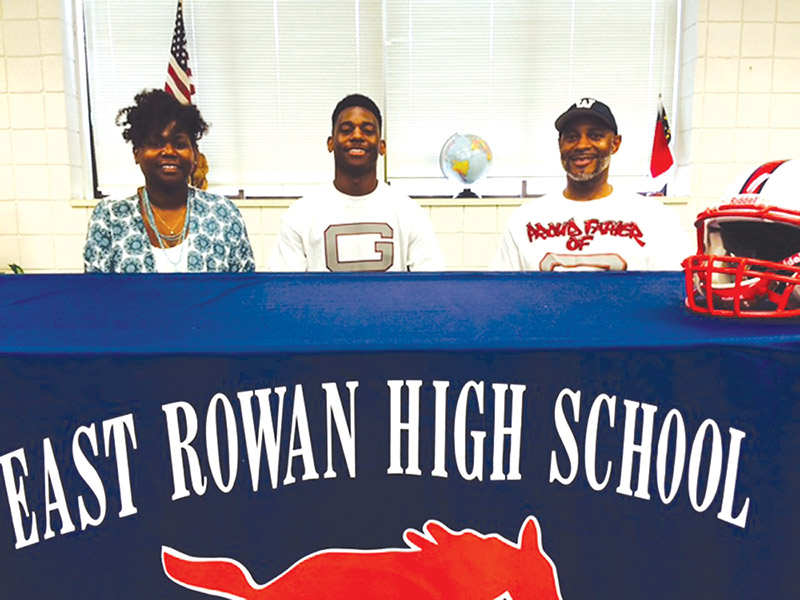 Photo submitted by Judith Fowler East Rowan defensive back Willie McCree (center) will play college football at Guilford College. He was joined by his mother Sherry McCree (left), father Willie McCree Sr. (right) and East Rowan coaches and teammates Wednesday morning for a celebration of the opportunity to continue to play the game.

GRANITE QUARRY — If you followed football last fall, you know East Rowan safety Wille McCree was one of the best defensive players in Rowan County.

A team captain, he was All-South Piedmont Conference and All-Rowan County. He was East Rowan’s leading tackler and he was the defensive MVP for a good squad that won two 3A state playoff games.

What you may not know about McCree is that he was competing with a badly banged-up shoulder late in his senior season.

“That was real tough,” McCree said.

“Willie’s shoulder was pretty bad,” Fitz said. “He showed what a special person he is and he showed how tough he is by playing through real adversity. He knew we needed him, so he kept playing.”

In the Mustangs’ second-round playoff victory at West Henderson, McCree played 60 snaps and was in on 27 tackles. He was also in on 27 tackles against Concord and 24 against Carson. He was a textbook tackler —  eyes through the thighs, wrap, and squeeze.

McCree is 5-foot-9, 155 pounds, so he lacks the pounds and inches Division I and Division II football programs are seeking, but there’s a good chance he’ll be a standout in Division III. He was one of the first players Guilford announced for its recruiting class of 2019.

Division III means no athletic scholarship, but McCree is a fine student who will receive academic scholarships. He excelled in East Rowan’s JROTC program.

“I really thought the military was what I would be going into, but then I started getting some offers and started thinking more about college football,”  McCree said.

While there were no papers to sign, McClamrock, the coaching staff and the school wanted to celebrate McCree getting an opportunity at the next level. His friends and teammates eagerly joined his family for cake, soft drinks and photos.

The younger McCree, wearing a Guilford T-shirt from Granite Knitwear, was all smiles as he talked about his college decision. His choice came down to Guilford and Averett, a D-III school in Danville, Va.

While Guilford is in Greensboro, it competes in the Old Dominion Athletic Conference with Virginia colleges. The Quakers are coming off a strong 8-2 season in 2014.

“Guilford places a lot of importance on their defensive backs and they had two All-America DBs (senior safety Satiir Stevenson and junior cornerback JerMario Gooch) this year,” Fitz said. “Willie can be an all-conference guy for them. He could be a very impactful player at that level.”

McCree isn’t sitting around the house resting on his football laurels. He’s running track for the Mustangs, and his best events are the 400-meter dash and 4-by-400 relay.

In whatever sport he competes, McCree will go as hard as anyone.

“We’re just super-proud of him,” McClamrock said. “Willie is never going to be the largest guy on the field. But he will be the one with the largest heart.”